We reached out to our followers on our social media page and asked them the question, “Can you narrate your first blood donation experience?” Everyone had a unique experience to share. We hope after reading these 8 stories, you are inspired to donate blood too!

‘Donating blood always seemed fascinating to me—to be able to save three lives at one go just by sitting in a place for 10 minutes seemed like an easy way to help society.’: Rhea Chandwani 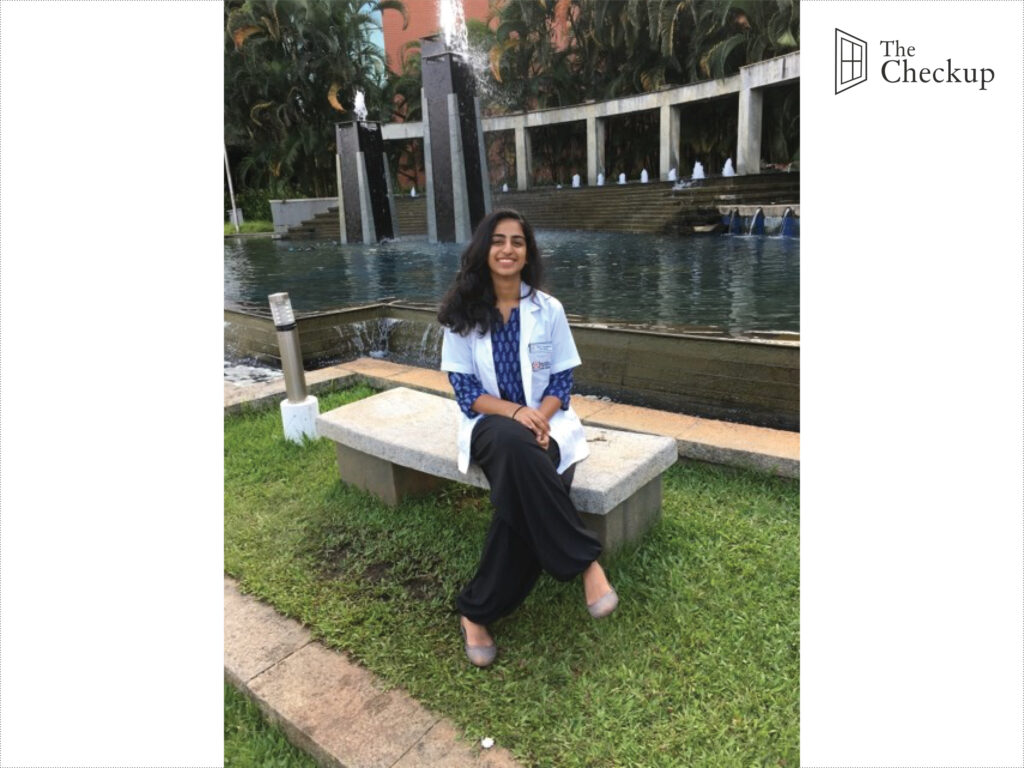 Rhea Chandwani is an intern at Kasturba Medical College, Manipal.

The first time I went to donate blood was in my first year of medical college. They rejected me as my haemoglobin level did not meet the target of 12 g/dl. That may not come as a surprise. Like any other teenager, I was picky in eating. But that did not stop me; I got more determined to work towards it! Donating blood always seemed fascinating to me—to be able to save three lives at one go just by sitting in a place for 10 minutes seemed like an easy way to help society. So, in another month, when I tried again, I made the cut with my haemoglobin now 12.5 g/dL! I was overjoyed. Being excited for someone to poke a 16-gauge needle into my veins may sound weird, but it was an absolute achievement for me. The experience went seamlessly fine, and I was proud to be a blood donor that day. Since then, I have always been wary of my haemoglobin. However, the next time I visited, it had reached a whopping 13.7 g/dL! Ecstatic to choose an easier path of saving lives than doing 5.5 years of MBBS, I donated blood a second time. Every drop helps make an ocean. Donate that drop from the ocean of your red blood cells and be a beacon of hope for those struggling out there. Believe me; you have enough!

‘I was not too interested in donating blood during my school days and early MBBS days because I feared needles at that time.’: Aritra Roy Chaudhury 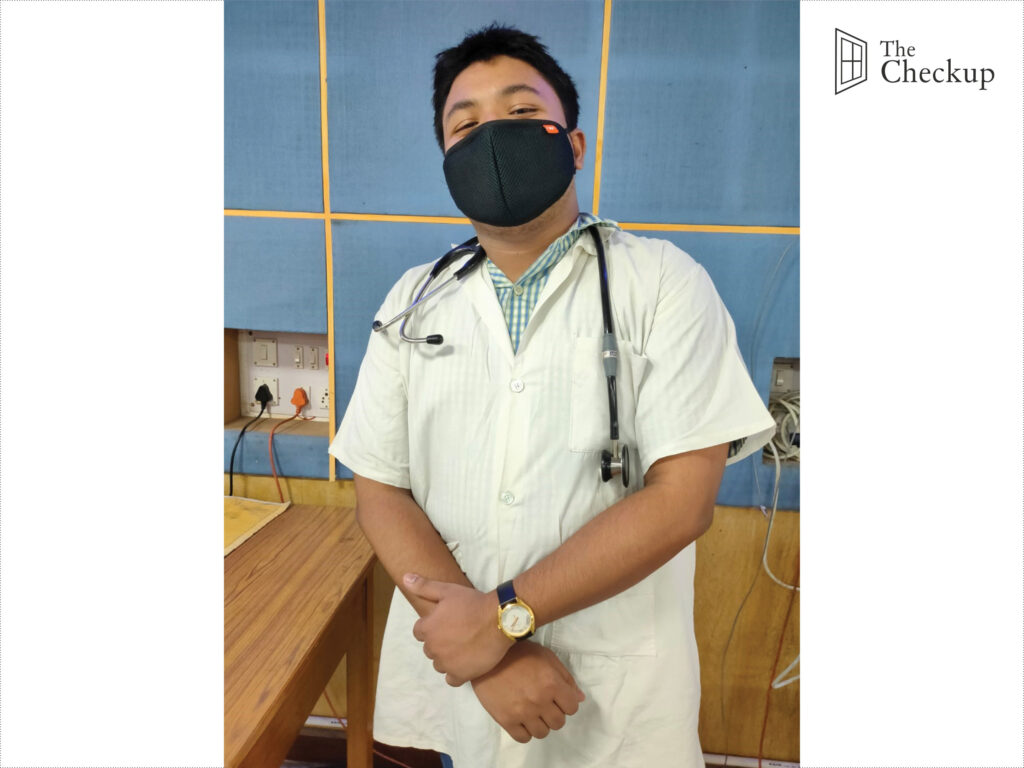 I experienced blood donation for the first time a few months back. I was not too interested in donating blood during my school days and early MBBS days because I feared needles at that time. A few months ago, one of my batchmates called to inform me that his father had to undergo a heart operation. The doctors had instructed him to collect blood as it was necessary for the surgery. I agreed instantly. My friend asked me to have a light breakfast and bring my Aadhar card to the hospital the next morning. When I reached the hospital, a medical worker asked me questions about my past blood donation experience and existing illnesses. After that, he pricked my finger and determined my blood group. Then he guided me to another room and asked me to lie in a reclined chair. The medical worker enquired about a few personal details such as my name, age and address. After all the easy steps, came the difficult one—the needle pricking. I was a bit nervous, but the medical worker sensed this and kept distracting me by asking me about my college. Thankfully, I did not feel the pain from the prick. He gave me a squeeze ball to press at regular intervals. After 5-7 minutes had passed, he took out the cannula from my arm, put some cotton at the site of the prick, sealed the blood bag and asked me to wait for half an hour in the adjacent room. He also brought me a packet of a sandwich and a banana. After half an hour, I finally took my leave, met my friend on my way out, asked him about his father and went home with the experience of donating blood for the first time!

‘The first time I donated blood was when my grandfather was hospitalised.’: Dr Anjali Mediboina 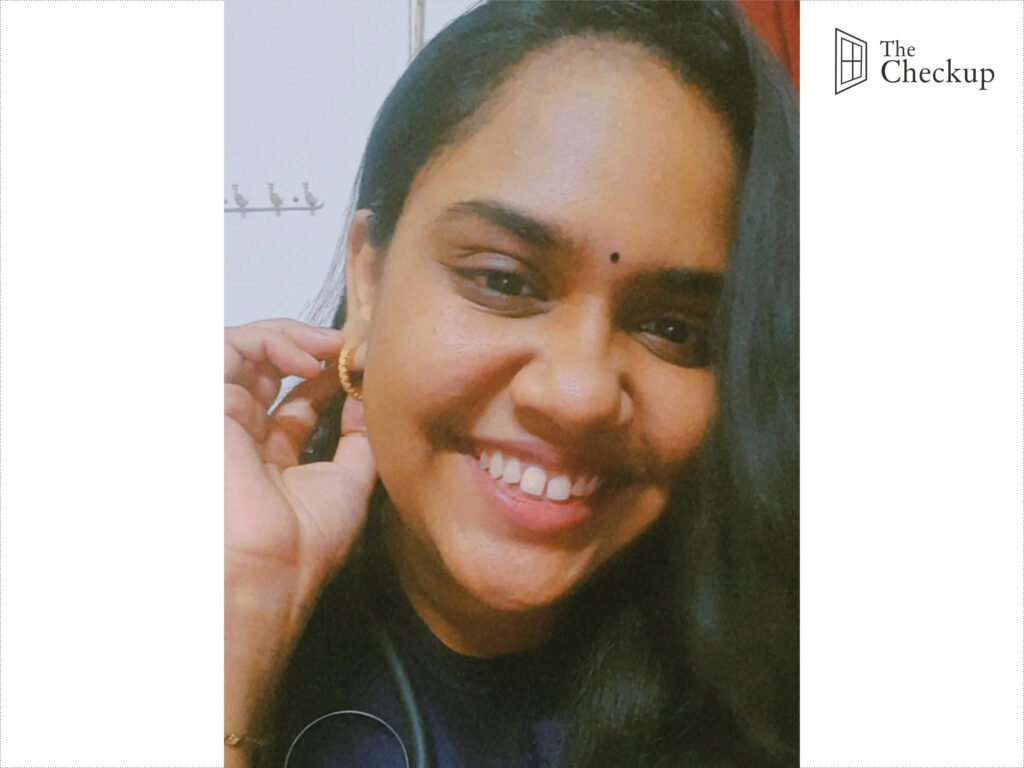 Dr Anjali Mediboina, a medical intern, is a music aficionado, and passionate about the arts. An avid reader, she found her love for writing during the lockdown.

The first time I donated blood was when my grandfather was hospitalised. His haemoglobin had dropped to 3, and to get blood for his transfusion, we had to donate blood. I volunteered to do so. I walked into the blood bank and told them I would be donating blood. They were happy. After taking my history and explaining the procedure, I was hooked up to the machine. To my wonder, the whole thing only lasted 20 minutes! It was good to know that my blood would help someone else. I will be donating blood again in the future.

‘My hospital had organised a blood donation camp, and my seniors had encouraged everyone to drop by for a noble cause.’: Yamini Sharma 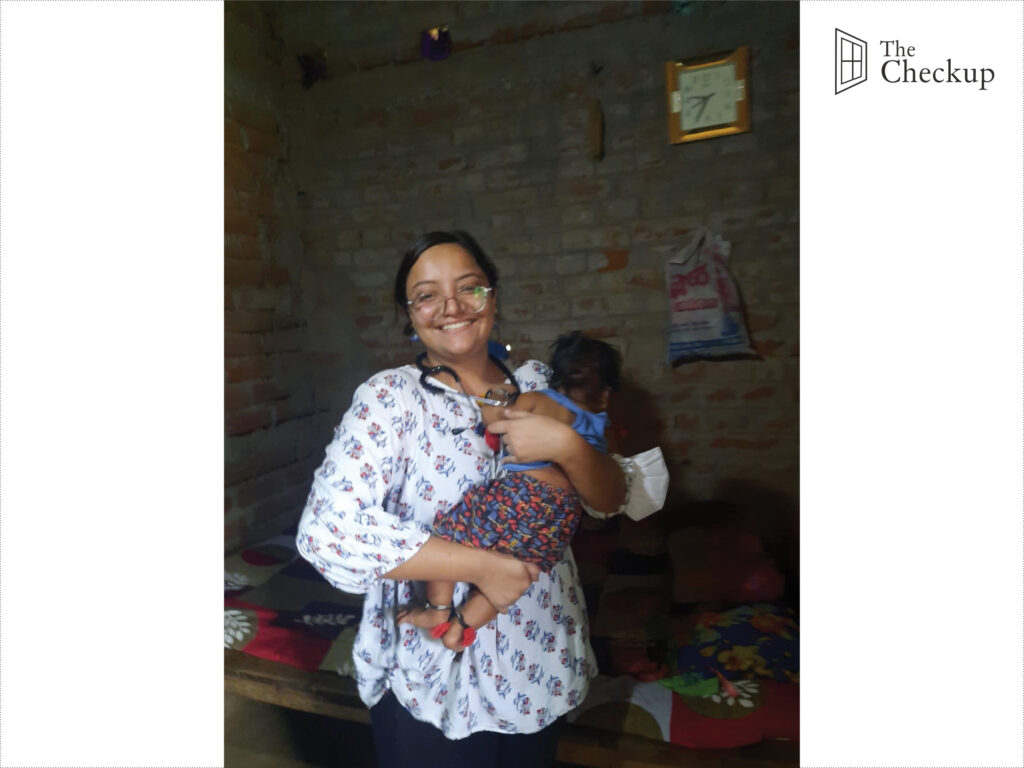 Yamini Sharma is currently juggling responsibilities as an Intern at AIIMS, Patna while trying to figure out her way ahead in life. She hopes to bring positive change in the life of every patient she meets, be it clinically or otherwise.

The first time I tried to donate blood was when I had just turned 18 and joined my UG college. My hospital had organised a blood donation camp, and my seniors had encouraged everyone to drop by for a noble cause. I half-ran to the blood bank in between classes to finally be able to do a deed that had a tangible and immediate benefit to another human. The matron nurse in charge of the operation took one long look at me and asked me one thing before handing me the paperwork, ” Beta, did you eat something today morning?”. I shook my head, and she promptly turned me away from donating. I was turned away from donating blood a few more times in the same fashion with one thing or the other amiss before I finally managed to donate blood a couple of months later. The nurses walked me through the process. They explained that I have “difficult” veins, so they might need to make more than one needle prick. Two pricks and multiple reassurances later, I was finally on the lounge chair, pressing the little squeezy ball with all my might to expedite the process. Five minutes later, I finally managed to donate blood for the first time in my life. I left the place with a sense of great pride (and some delicious munchies!).

‘I was a little worried about my Hb levels and wondered what would happen if it is not optimum for a blood donation.’: Keerthana Chunduru 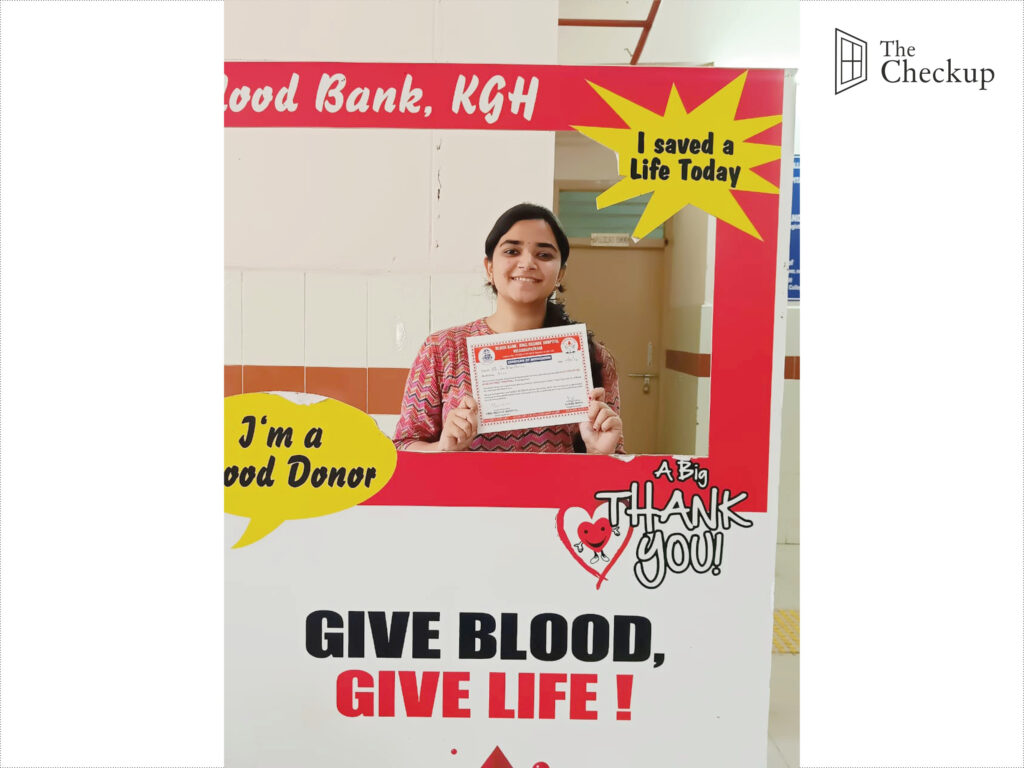 As soon as I woke up, I reminded myself, “You are going to donate blood for the first time in your life.” I had been waiting for this particular day for so long. I should mention the fact that I was more excited than I had imagined I would be. First, I made sure not to skip my breakfast because it is the first and foremost step on a blood donation day. Even though I knew the hospital staff would provide us with enough fluids, I still carried a bottle of fruit juice as an extra precaution. I was a little worried about my Hb levels and wondered what would happen if it is not optimum for a blood donation. Well, I would be disappointed. But they turned out to be pretty good, and I was taken into the wardroom. It went well, and I felt normal even after the procedure. Then it struck me, “A simple act of donating something that is only around 10% of your body weight might save somebody’s life.” It may not be a big deal. But a simple act of donating blood gave me an abundance of satisfaction, and I am sure it will create the same feelings for anyone else who does it. After all, we are doing this for somebody else and not for ourselves. I hope everyone does the humble act of donating blood at least once in their lifetime.

‘At first, I was rejected based on my appearance; I appeared too thin to donate blood.’: Dr Surya Reddy 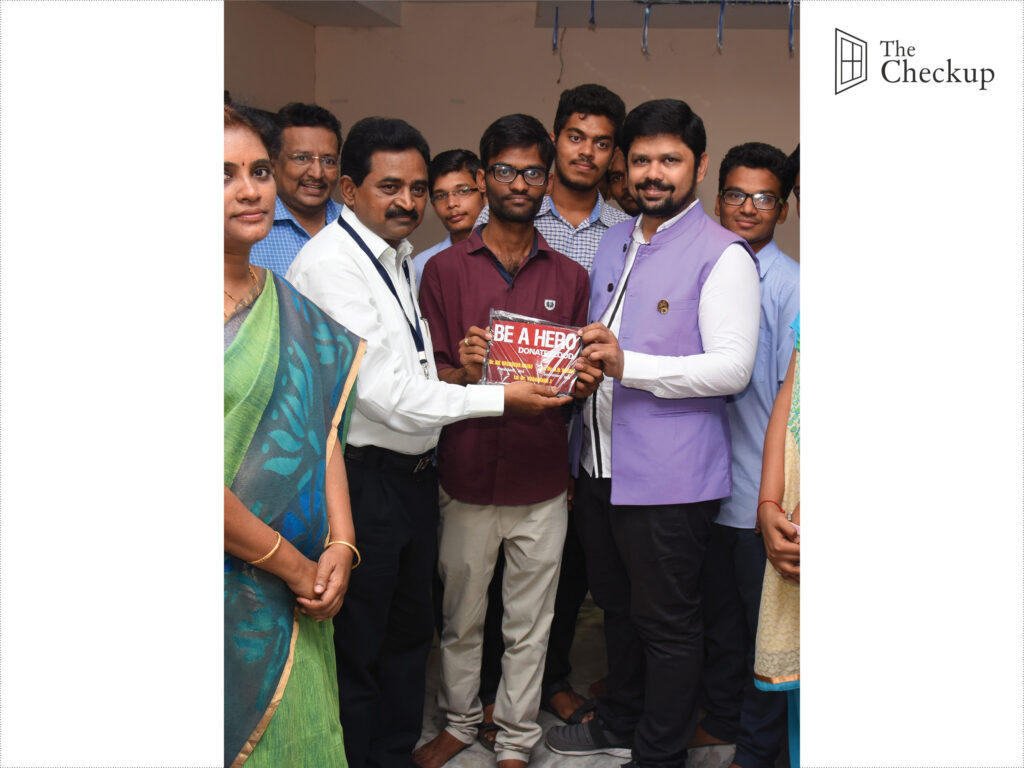 ‘I got scolded by my parents because they thought I was not fit enough for the blood donation, but I was happy enough to ignore that.’: Shreya Singh 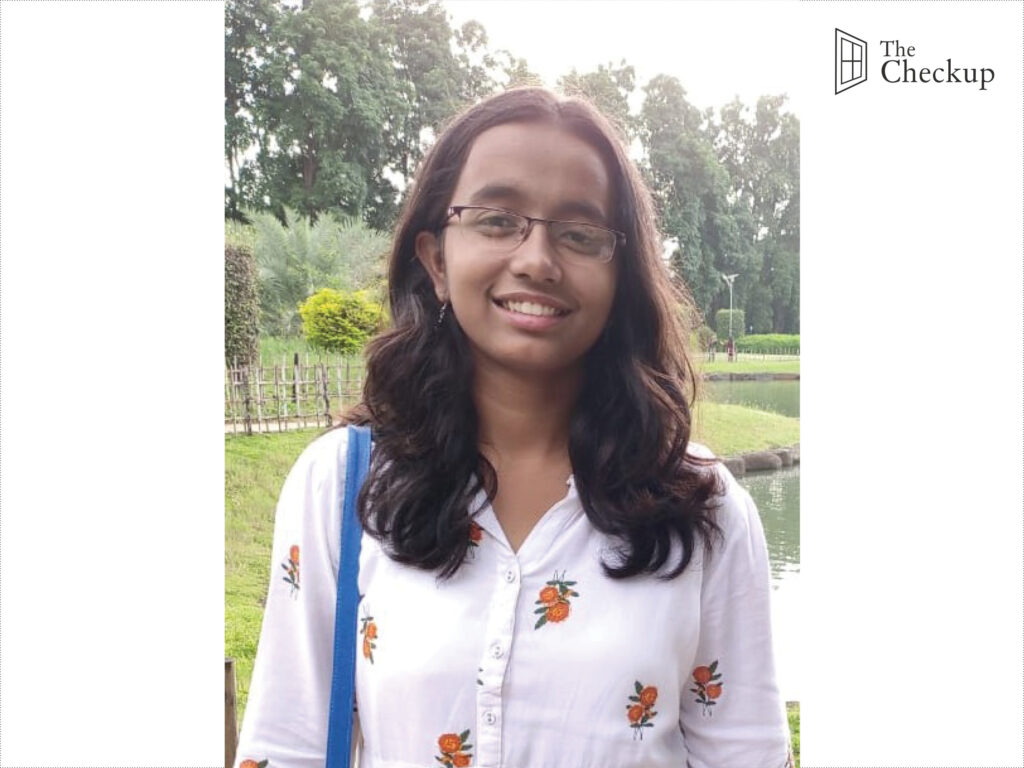 My first blood donation experience is my only blood donation experience. Last August was the first time I could gather the courage to donate blood. I just went randomly, not expecting anything. It was at the blood donation camp set up by my college. Firstly they tested my Hb. At that moment, the Hb test seemed to be the most crucial task because they had rejected some of my friends due to their low Hb levels. Fortunately, I had enough Hb to donate, probably attributing my habit of not skipping meals irrespective of how bad the food from the mess was. The blood donation procedure took less time compared to what I had imagined, and I felt great after it. Later, I got scolded by my parents because they thought I was not fit enough for the blood donation, but I was happy enough to ignore that. It has been my fault that I have not donated blood again. But I plan on donating again soon.

‘We got a call at midnight for a B+ve blood type. I was very confident and went in to donate a pint.’: Dr P.J.Vishnu Bharadwaja 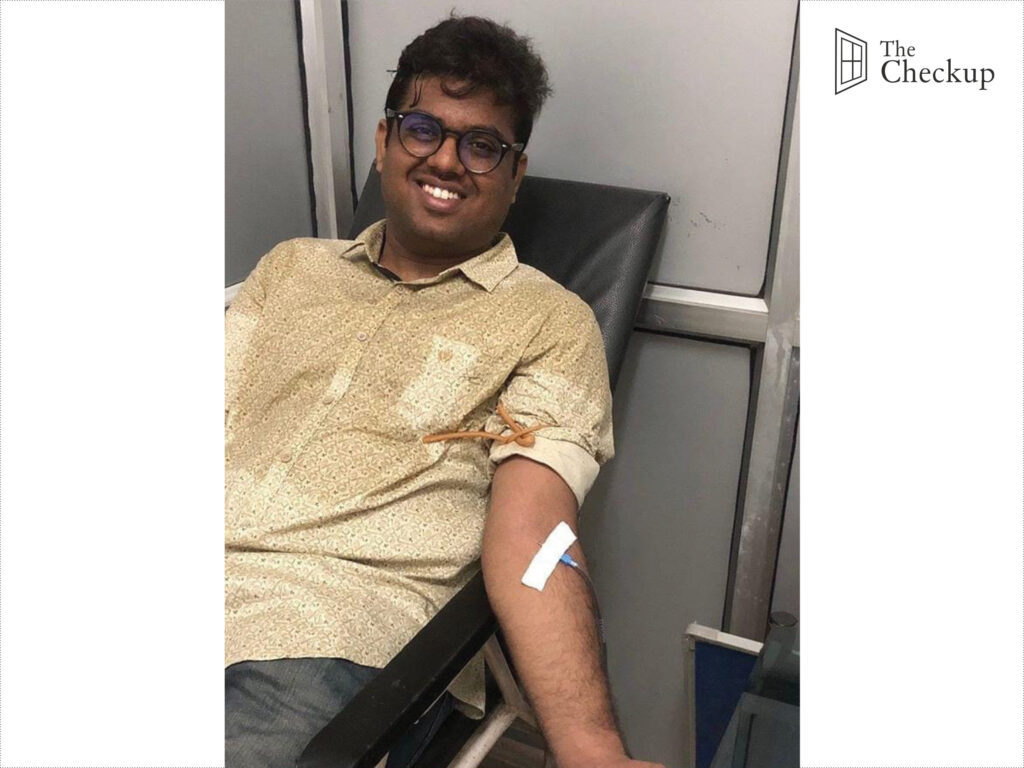 Dr P.J.Vishnu Bharadwaja is a man with great curiosity and a love for photography with a particular interest in public health communications.

It is a tale from my first year of college when I was a part of a student blood donation organisation. We got a call at midnight for a B+ve blood type. I was very confident and went in to donate a pint. As I stepped into the blood donation centre, I started panicking. Maybe it was the needle or the squeaking noise of the machines or the grumpy man with a deep hoarse voice commanding me in a language unknown, but it made me break out in a cold sweat. The pricks in physiology practical and testing seemed like nothing before this moment. Even before I noticed the pain, I was stuck with a large-bore needle and saw my blood gushing into a plastic pouch. Meanwhile, the receiver of the blood walked in with a juice box in hand, thanking me for that. It was over before I knew it, but there was the ultimate twist when the technician walked out saying it was not B+ve but a negative. I could see the changing colours of the wasted juice box.