As we enter into a new year and await our return to normal life in these “corona” times, the only respite we have is the release of one of our most favourite films from the DC Comic Universe the second part to the Wonder Woman series titled WW1984 (Wonder Woman 1984). The movie released around the holiday season to grant it more viewership and popularity. Infact, it is amongst the first few international films to be released and watched in the cinema halls in 2020. Also available on Amazon Prime video, this movie is a must-watch for all fans of the franchise and guarantees to live up to the high expectations which had been set by the first film.

WW1984 shows Diana Prince(Gal Gadot) our very beloved “Wonder Woman” heartbroken and lonely while she lives in an era beyond her age and liking, a world driven by greed and ambition, where although she has adapted to survive her heart hasn’t quite connected and felt at home. Barbara Minerva(Kristen Wiig) a diabolically opposite woman to our favourite female lead faces challenges of her own as her thirst to be empowered, acknowledged and fancied remain unquenched. Both women who are diverse and unique individually develop a bond and kinship over their desolate lives and want for something unachievable.

As a reply to their wishes enters onto our main screen Maxwell Lord (Pedro Pascal), a businessman with a God complex whose desire is to be the Almighty himself granting wishes to mankind in return for favours for himself. However, it is said that “One who wants everything every time will lose everything anytime” and as a barter for their wishes Diana begins to lose her Amazonian powers and Barbara loses her humanity. The climax followed by one of the most amazing fight sequences between our femme fatale wonder woman and Cheetah leaves you excited, hooting and asking for more.

As the world crumbles the only way to save humanity and restore balance is to break the shackles of greed and escape from the permanent slavery it entails by renouncing all wishes that were granted. 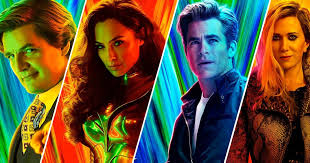 The highlight of the movie is its fabulous cast led by Gal Gadot who seems to embody and embrace wonder woman in a way which erases the thin line between reality and fiction, Kristen Wiig is amazing in her dual role as the humble Barbara and the feline Cheetah, Pedro Pascal surprises us by playing Maxwell Lord a character we hate but also feel empathetic towards and lastly, Chris Pine returns as the handsome, innocent and dreamy Steve Trevor. The theme of the movie is to show that as humanity hurtles towards progress, we also need to slow down and take a look at back at the price we have to pay in return for the development of our future. The direction is crisp and cinematography beautiful as we are thrown into the 1980s, action sequences also are well executed and the script and dialogues were well written. 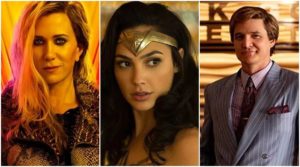 All in all, when in doubt over what to watch on a lazy Sunday, I would suggest a Wonder Woman movie marathon where both the parts can be watched at leisure in the comfort of your home. (Available on amazon prime video)

Telemedicine – The Pros and Cons

Can Dogs Be Used to Detect COVID-19?