“Great things are done when men and mountains meet; this is not done by jostling on the street”

There is something about the mountains that has always spiked human curiosity. Whether it is the exhilaration of conquering a mountain, or the satisfaction of conquering one’s own fear, many humans have wanted their story stamped atop a lofty peak. We all have grown up hearing stories of Tenzing Norgay and Edmund Hillary. Many of us have dreamt of scaling heights like them. However, not many of us have the good fortune of converting these childhood fantasies into reality, caught as we are in the massive web of life, with its strands of career, family and societal ties. And yet there are some who managed to make these stories their own reality as well. So, here’s a story of a doctor who lived her mountaineering dream by completing the trek to the Everest Base Camp….

…”It was that one trek to Rajmachi that changed my life in every sense. Not only did it make me fall in love with trekking, but inspired me to complete 35 treks in the Sahyadris over the next 2 and half decades. But the thirst to climb snow-capped mountains was something the Sahyadris could never quench. So, a lot of deliberation, planning, and one leap of faith later, I was finally off on my very first Himalayan trek- The Everest Base Camp. 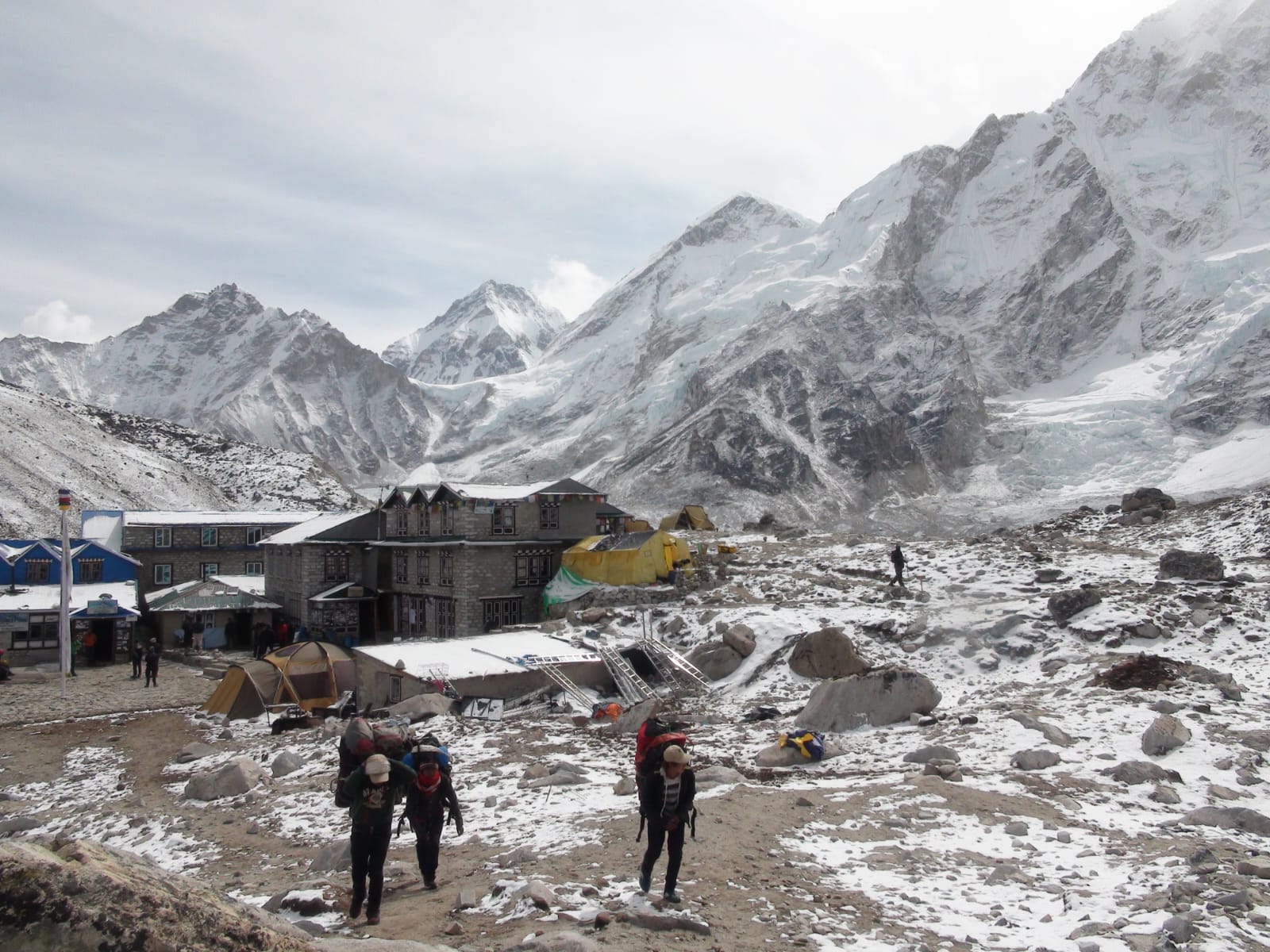 It was 2016… A year after suffering from a massive earthquake, a recovering Nepal finally opened its doors to enthusiastic trekkers and I, along with a bunch of 7 other (more experienced) co-trekkers, embarked on the journey of a lifetime.

It began with the flight to Kathmandu after which we had to fly to Lukla. Now the flight to Lukla is not your regular air travel experience. The aircraft that seats only 15-20 people at a time, flies terrifyingly close to the ground.  It is like skimming the roof tops of small houses, each of which is clearly visible from the aircraft’s windows. Due to the ever-changing weather and the dangerous terrain, only few pilots are granted the license to fly these aircrafts.

After a turbulent flight, we finally reached Lukla and began our ascent. We had to hire porters to carry our baggage to our destination. The porters were young hardworking Sherpas who could carry two 15kg duffel bags each and race up the mountains, making sure that our bags were awaiting us when we finally made it to our destination. They toiled hard from dawn to dusk only to get back on their feet again in the morning, often endangering themselves, just to earn a pittance. It was heart wrenching to see the amount of arduous work that they had to put in just to put food on the table.

We first went from Lukla to Phakding and from there to Namche bazar. As we ascended higher and higher, the houses thinned out, as did the air. Hotels slowly turned to tiny tea houses, washrooms became tinier and tinier, and taking a bath or seeing one’s face in the mirror became a mere memory of a luxurious past life. Meals often were just some Thukpa or a small rice dish, but it did not really matter as our appetites dipped with the rising altitude.

Every day we climbed for 7-9 hours with a stop for lunch. Before the trek began, I had planned to take a small stroll on reaching the designated tea house, before turning in for the night. Eventually, in the course of the trek, I came to laugh at the ridiculousness of my idea as the biting cold of -3oC to -5oC prevented us from staying outdoors even for a second more than necessary.

Yaks carried essential supplies up and down the mountain and we could not help but marvel at this creation by the Almighty: an animal, which could withstand the harshest of conditions.

Halfway to the base camp, we got a glimpse of the peak of Everest. Flanked by the imposing K2, Lhotse and Amadablam, the brilliant peak of Everest seemed both, inviting and formidable, as if warning us not to underestimate it. These few tantalizing glimpses as well as the brief conversations we had with the trekkers who were attempting to summit Everest often made us wonder about how one felt on literally setting foot on the ‘top of the world’.

The day of reaching the base camp finally dawned. We set off early in the morning. Much to our dismay we encountered a hail storm, which pelted us with tennis ball sized hailstones. Trekking on ice was much harder than we imagined.  We kept slipping from time to time. Yet the hope to make it to the base camp kept us going through the storm… and our efforts finally paid off when we reached the destination that we had set out for. All that we endured in the past few days seemed to be worth that exhilarating feeling of achieving the goal we had set our eyes on.

The base camp had the tents of the people who were waiting to attempt the summit. It was here that we realized that the end of some journeys, mark the beginning of others.

We had imagined celebrating on reaching the Everest base camp. But the hailstorm made sure that we had to make our way back as soon as possible. So, a few photographs later, we began our descent back to our tea house. 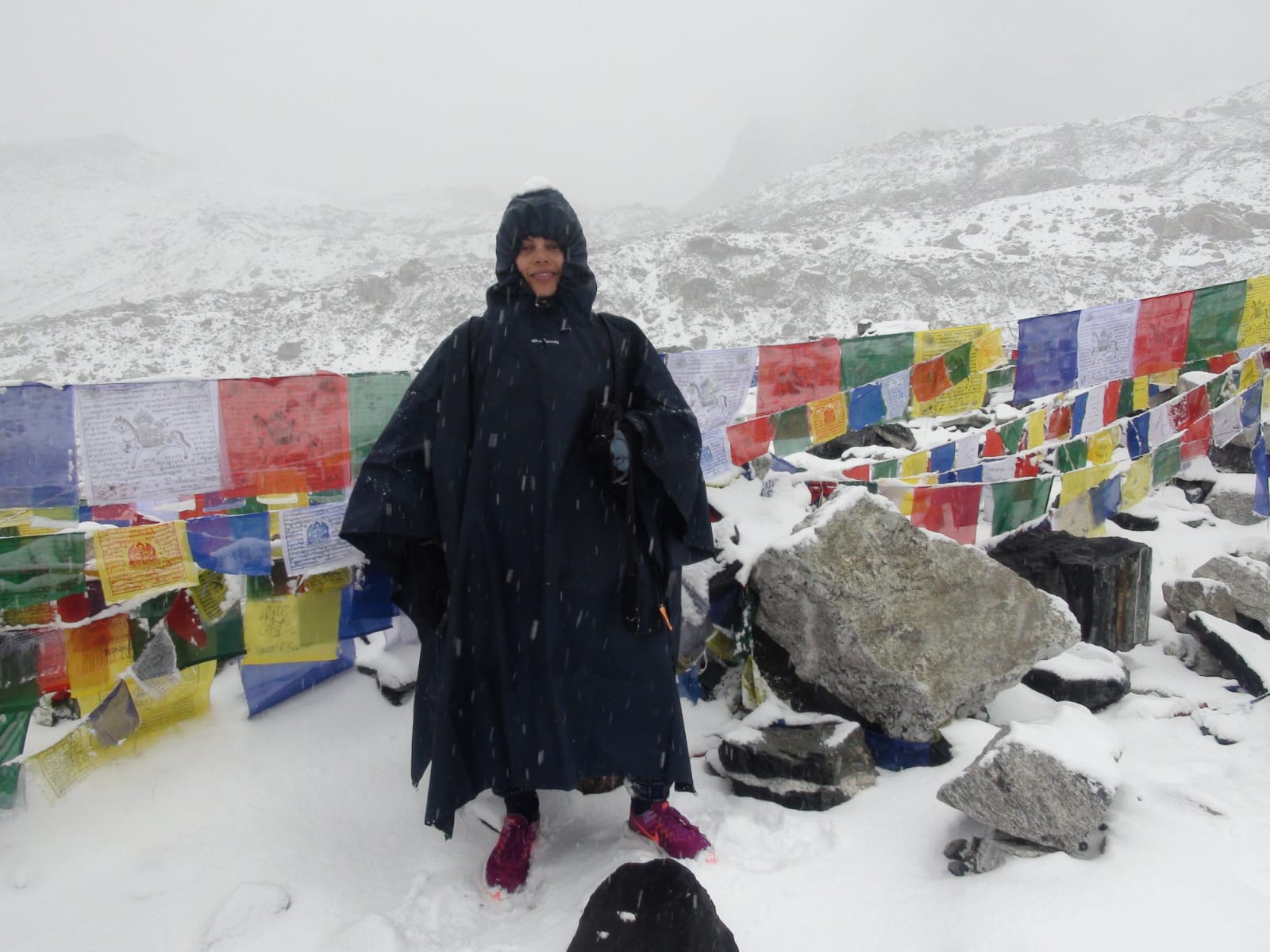 On reaching the tea house, the joy of reaching the base camp began to kick in.  I realized that though I physiologically may not have been built to sustain such harsh conditions, I was definitely gifted with a special gift of determination which sustained me throughout. This determination drove one to super-human feats and became your fur coat in extreme cold, your umbrella in unforgiving rains, your spot of cool shade in sweltering heat, your lifeboat in a sea of problems. Today my determination had led me to what would be the first of many such adventures.

The journey back to Lukla was relatively faster as we would cover almost twice the distance while descending compared to ascending. And a few days later, after we made it back to our starting point, along with having a bath after many days, we finally got access to a mirror where our rugged sunburnt faces made us realise what the past 2 weeks in the mountains had actually done to us. And yet, every ache and pain was worthwhile, for we knew that the physical effects would fade but the memory of the trek would last, to be cherished forever.

As I was returning from Kathmandu, I could not help but wonder if any of this would have been possible but for my husband’s belief in me, if he had not taken me to Rajmachi all those years ago, when trekking was still believed to be a male domain. 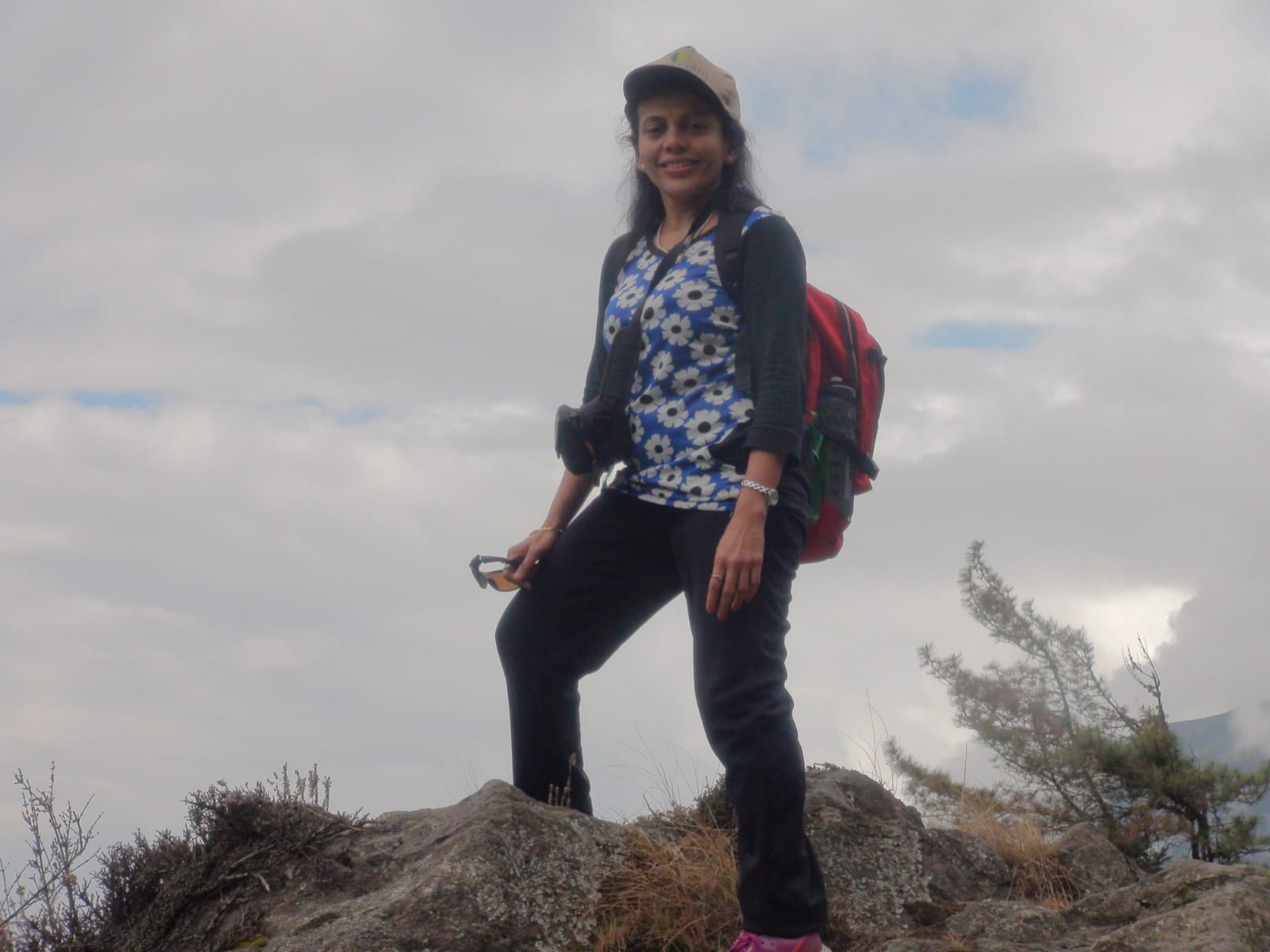 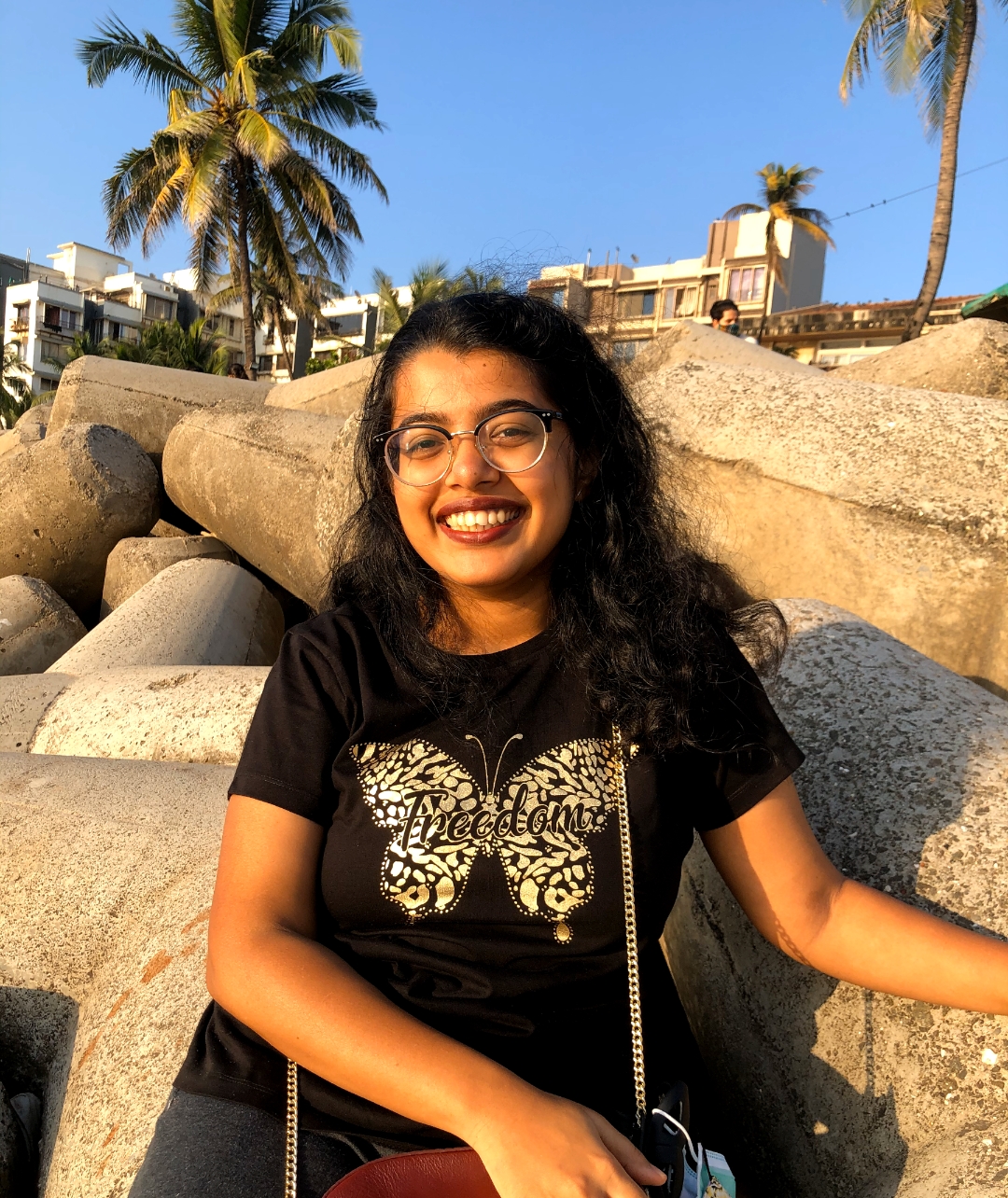 Dr. Manasi Rege is a 1 st year resident doctor in the Department of Pharmacology at L.T.M.M.C. and G.H., Sion hospital. She is fond of writing short articles, poetry, and travelogues. An avid reader and a cat lover, she also spares some time to learn the violin.