On rewinding the past, when we speak of great warriors and leaders who gave their life, soul and generations to protect the independence of India, one cannot miss the mighty Marathas. Marathas had their influence throughout the country and especially in Central India. One of the eminent names that spring up when we speak of women warriors is that of Rani Ahilyabai Holkar from the Holkar clan who ruled the princely dynasty of Indore.

Rajmata Ahilyabai (31 May 1725 – 13 August 1795) is a name in history known as a formidable Holkar Queen of the Maratha Malwa kingdom, a warrior of immense bravery, wit, wisdom and valour. She holds her place in history as a fearless warrior and a great women reformist who ruled her land for 30long years.

She was well known for her piety, administrative abilities, keen interest in people and their wellbeing, and constructing of magnificent holy temples of Lord Shiva. Devi Ahilyabai stood out as a rare and exemplary example that a person achieves greatness not by gender or birth, but by deeds.

Ahilyabai was born on 31 May 1725 in the village of Chaundi, in the Ahmednagar district of Maharashtra. Her father Mankoji Shinde, was the Patil of the village & a member of the proud Dhangar community. Her mother, Sushilabai Shinde, also seemed to be a well-read pious woman. During that era, women were not allowed to attend schools but Ahilyabai’s father taught her to read and write.

Though Ahilyabai didn’t belong to a royal lineage, she was destined to be the daughter-in-law of King Malhar Rao Holkar. A Commander in the service of the Maratha Peshwa Balaji Baji Rao and the acclaimed Lord of Malwa territory, Malhar Raoji Holkar on his halt at Chaundi village while travelling to Pune spotted the eight-year-old girl Ahilyabai feeding the hungry and poor at the temple service. He was extremely moved back and impressed with the girls strong character asked Ahilyabai’s parents her hand for marriage for his son Prince Khande Raoji Holkar.

The Beginning and Accomplishments

Rani Ahilyabai was already trained to be a ruler and requested the Peshwa to let her take over the administration as a leader. Some people in Malwa opposed her but many in the Holkar army were keen to see her as a ruler and supported the queen. Finally, she was granted permission by the Peshwa. She ascended the throne and became the ruler of Indore on 11 December 1767. Devi Ahilyabai never kept the purdah system but was always accessible for the audience to solve their problems. 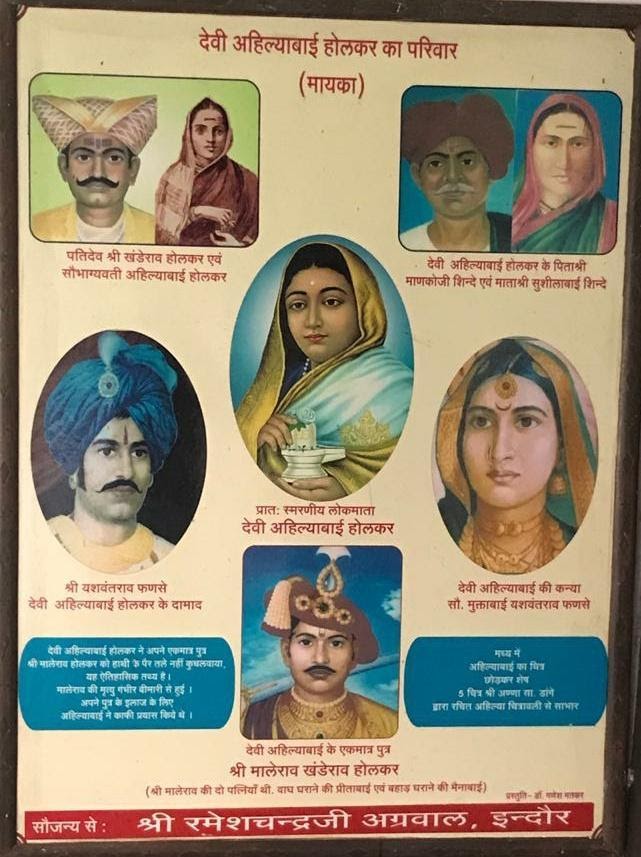 After a year of her rule, the brave Holkar queen protected her kingdom fighting off invaders tooth and nail from invading Malwa. She was a versatile fighter and used her weapons to slay the enemies on the battlefield. She did not allow the intruders to pass through with her four-quiver arrows fitted onto the corners of the howdah of her favourite elephant. This became a part of the local folklore.

As a skilled archer, she fought with Bhils (tribes of Rajasthan) and Gonds (tribes of central India) and had one of the most stable reigns of the 18th century. Tukoji Rao Holkar, the adopted son of Malhar Raoji Holkar, was appointed by Rani Ahilyabai as commander-in-chief to head the military. He served the queen throughout her reign as he was familiar with the ideology and strategies of the Holkar Dynasty.

Rani Ahilyabai ascended the throne and became the ruler of Indore on 11 December 1767. The great warrior queen developed Indore from a small village to a beautiful and prosperous city and made Maheshwar the capital of Holkar State. All credits to Rani Ahilyabai in her 30-year reign that Malwa remained stable peaceful where the Holkar dominions remained undiminished and unattacked.

She was a great devotee of Lord Shiva and built many temples, forts and sponsored festivals also gave many donations for regular worship in many Hindu temples. Outside the Malwa region, she built dozens of temples, ghats, wells, tanks, rest houses across the areas stretching from the Himalayas to pilgrimage centres in South India. As per the Bharatiya Sanskritikosh lists as sites she embellished, Kashi, Gaya, Somnath, Ayodhya, Mathura, Haridwar, Kanchi, Avanti, Dwarka, Badrinarayan, Rameshwar and Jaganathpuri etc.

She also established a textile weaving industry in Maheshwar. The current generation of Holkars runs an NGO called ‘Rewa Society’ that has and continues to do pioneering work to revive ancient art forms from the region. Due to Rewa society, the popularity of Maheshwari weaving products and handlooms has reached worldwide. Today thousands of looms exist in and outside Maheshwar providing employment to lakhs of people, especially women.

Rani Ahilyabai was a part of her policy of unifying the whole country she arranged for Gangajaal to be sent every year to 34 shrines scattered across the country.

Ahilyabai used to hold public audiences every day and was available to hear their grievances. Many historians write about how Rani encouraged all the people in her kingdom to do their best. During her tenure, the merchants weaved elegant clothes and the trade flourished to no end. None of the farmers was poverty-stricken and became self-sufficient in their own way. Roads, walls, and trees were constructed and planted to make travel convenient for the people. Poor, homeless and orphaned people were given help as per their needs. Rani Ahilyabai was a woman ahead of her times.

Maheshwar Fort’s beauty and architecture were constructed by Rani Ahilyabai. The fort is one of the prime attractions for tourists who visit Maheshwar. The Rajwada is located inside the Fort in Maheshwar. The fort comprises of two sections – the Eastern section with ornated cenotaph complex, and the Western section that houses the Rajwada, the royal court and residence of the present royals.

The palanquin of Ahilya Bai is displayed at the entrance of the two-storeyed wooden building. The beautiful rooms, courtyard, floors and museums are intricately decorated and the simple throne depicts the simple life led by Devi Ahilyabai. Rajwada was a residence of the Devi Ahilyabai Holkar and where she used to pray. 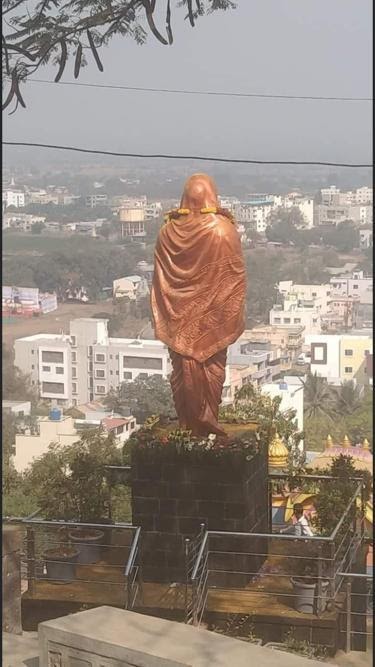 The Rajwada Complex is the perfect amalgamation and mixture of the Maratha, Mughal, and French architectural styles. The complex also boasts intricate designs and architecture. One of the major attractions of this monument is the statue of Rani Ahilyabai standing tall right at the entrance. Ahilyadevi’s capital at Maheshwar was the scene of literary, musical, artistic, and industrial enterprises.

The beloved wueen passed away at the age of 70. Her work, accomplishments, magnificent rulership and the beautiful shrines will always be remembered in the pages of history and inspire many generations of India.

The reign of Ahilyabai, of Indore in central India, lasted for 30 Yrs. This has become almost legendary as a period during which perfect order and good Government prevailed and the people prospered. She was a very able ruler and organizer, highly respected during her lifetime, and considered a saint by grateful people after her death. Even the Nizam of Hyderabad is said to have praised Rani Ahilyabai Holkar saying that ‘No woman and No ruler are like her.

In 1996, to honour the memory of Ahilyadevi Holkar, the citizens of Indore instituted an annual award in her name to be bestowed on an outstanding public figure. Nanaji Deshmukh was the first recipient of this award. The government of India issued a commemorative stamp in her honour on August 25, 1996.

As a tribute to the great ruler, Indore domestic airport has been named “Devi Ahilyabai Holkar Airport” where her beautiful statue is placed at the entrance. Similarly, Indore university has been christened Ahilyabai Vishwavidyalaya.

The history and lifestyle of the Holkar dynasty are well known worldwide. The Lal Baugh Palace, Rajwada, Maheshwar, and Kaanch Mandir are a great tribute to the Holkar Dynasty. Rani Ahilyabai is considered a pioneer and one of the best warrior queens in Indian history. The eminent name of the ancient Holkar Dynasty, Rani Ahilyabai will always be remembered as a prolific ruler, a woman of substance and a great queen in history who has always been an inspiration to women and generations ahead.

Those wishing to take know her life in greater depth must visit Maheshwar and the nearby city of Indore to soak up the reverence and respect that the warrior queen demand even today– many generations after her passing.

In 1849 Joanna Baillie writes a poem about Rani Ahilyabai :

“In latter days from Brahma came,

To rule our land, a noble Dame,

Kind was her heart,

and tright her frame,

And Ahlya was her honoured name.”

The History of “Lotus Feet” 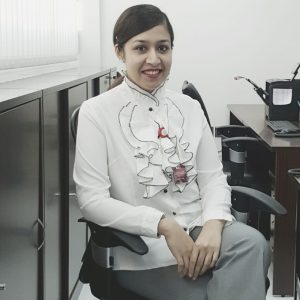