For how long will women have to face it?

He is born, she is born. There’s rejoicing in both families. His family distributes pedhas, and hers, barfi. Both are loved, cherished, and encouraged to spread their wings. Both go to the same school, score similar marks throughout, pass the same entrance exams and join the same professional course. She is selected to pursue a residency in a more challenging branch but, facing some familial opposition, picks a ‘lighter’ branch instead while he continues unhampered. So far, not so rosy.

After some parental pressure, she agrees to join him in holy matrimony and in the blink of an eye or rather in the tightening of a knot, the world as she knew it changes! Now, she wakes up early and makes breakfast while he lounges with the newspaper (he was late the night before because of an emergency, you see). She gets the tiffin ready while hustling the kid along, whom he drops off to school with a long-suffering air if he has no emergency. While she’s in an important consultation, she fields a call on a PTA session, cancels an overseas conference invitation because it clashes with the kid’s exams, and heads home early, cancelling a shopping trip with a friend as she has to get dinner ready.

After dinner, she clears the plates and puts on a load of washing before checking the kid’s project. In the meantime, he has come home after having a drink with a colleague and settled at the dinner table, where he pulls a face because the vegetables are not to his liking. He then makes himself scarce in the study because he has an important presentation the next day on which his promotion hinges while she puts the kid to bed and preps for the next day, forgetting to go through the reports that her junior mailed her.

And so it continues, with his rapid progress up the career ladder until she can no longer keep pace, and she resigns her job for not being able to undergo institutional quarantine during the Corona pandemic.

“Good riddance”, he says, “I earn enough for both of us anyways. You can now devote more time to home and hearth while I bring in the bacon”.

And so ends another chapter in the book of ‘The Great Indian Inequality’, with her taking the mandatory step back for the wellbeing of her family, rueful about the long hours she spent poring over tomes to ace her exams, biting back the bitter remarks when anyone, from friends to family preen and compliment HER on HIS success and on how she’s the perfect foil to compliment him, on how he owes his success to her sacrifices and what an asset she is in caring for his parents, many a time at the cost of her own, wishing that she had not been born into an emancipated family only to marry into a patriarchal orthodox one.

People think that their platitudes will fill the job-shaped hole in her heart, and the kitchen will replace the void created by her laboratory. And so, a pathologist conducts her own post-mortem! What irony for a country that advocates ‘Beti Bachao Beti Padhao.’

Inequality amongst the sexes is not new to the Indian milieu. While recent historical evidence points to ancient India being more egalitarian, the advent of agrarian society changed all the rules creating shackles for women, which they had been struggling against for millennia. While quite a few regions of the country like Meghalaya, Assam, Kerala and a few areas of Karnataka boast a matriarchal society, by and large, patriarchy still dominates huge swathes, especially in the hinterlands.

Under the guise of protection, women have been systematically alienated from politics, economics, sociology and education. With male bonding coming to the forefront, most rules governing society were made by the male for the male. What is strange is that while we chose to break off genetically from the chimpanzees millions of years ago, we still choose to ape the ape when it comes to our societal structure.

The inroads that patriarchy has made into our psyche are so deep that we choose to normalise or ignore them rather than look them in the face and acknowledge them for the problems they pose to the physical and mental health of half of the country’s population.

The Indian constitution is revolutionary because it guarantees a Universal adult franchise, thus eliminating the need for a suffragette movement, but this has not created the equality it was meant to. Centuries of conditioning have ensured that women are only now emerging into the light of day as far as education, legal rights, and economic rights are concerned.

While it is now ‘Trending on Twitter’ to support feminism and female equality, ways and means of hobbling women in the most innocuous ways remain hidden in plain sight. It may be the conditioning in early childhood where most people attending a little girl’s birthday party tend to give her dolls, miniature kitchen sets or frilly things in pink or that older girls are often admonished for sitting, eating or laughing in what does not conform to ladylike ways in society.

Schools, whether pedestrian or elite, generally do not have cricket or football teams for girls or if they do, they hardly play the kind of matches that boys play. Any woman prone to stick to her opinions and challenge societal norms about clothes, food, customs or traditions is viewed as ‘forward’ and not in the right sense.

While more and more women are breaking the glass ceilings to take up challenging careers, they are so few and far between as compared to the male counterparts that they often warrant headlines in dailies, as seen in the case of B. Sirisha and V. Bharathi, who filed and won a case against the Telangana electricity board to become the first ‘linemen’ in the country! 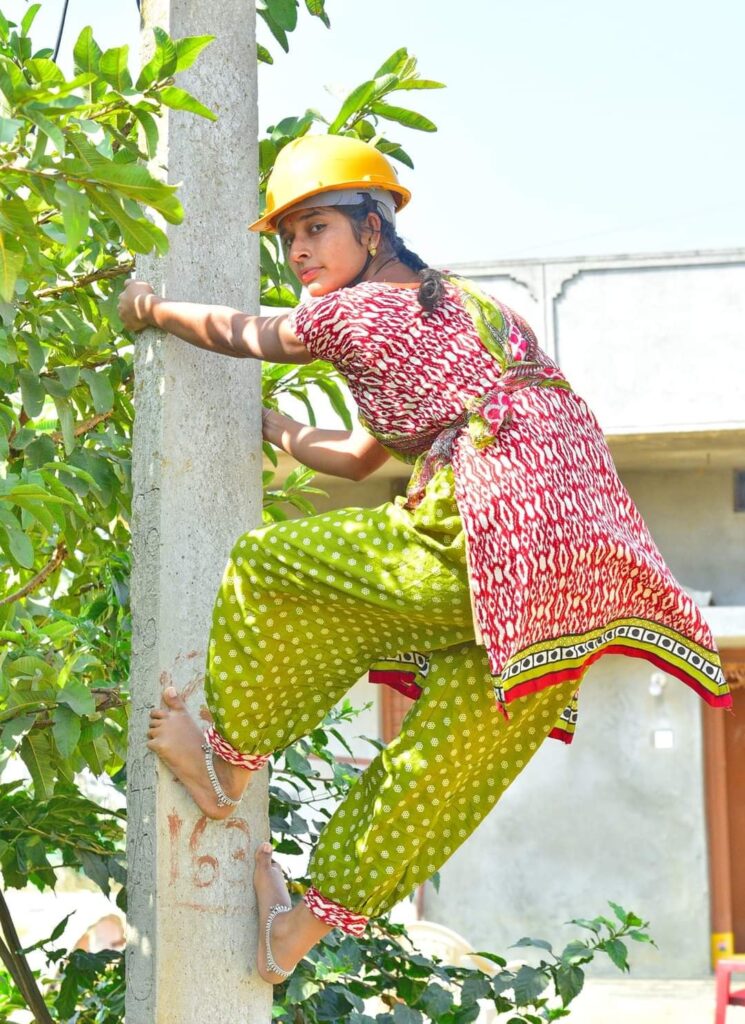 Nowhere else in the world is the image of women as the ‘Magna Maters’, the great nurturers as popular as India! No matter what the lady may be capable of achieving, if she can’t turn out perfectly round rotis, she is slightly looked at with a prejudiced eye. They are expected to pick up the slack from the word go when it comes to the ‘Great Indian Sansar’ or family life. And being the natural caregivers that they are, they bend over backwards to do it all, often taking personal responsibility for circumstances beyond their control, ranging from the mundane like a few dishes sitting unwashed in the sink to the extraordinary like a downturn in the family business.

Another sad fact which needs to be acknowledged is that most often than not, it is other women who stand to gain in the patriarchal hierarchy who perpetuate these injustices to safeguard their own position within the family structure, ingratiating themselves with the males rather than bonding with their ilk by dint of soft sighs and rolling eyes whenever another woman puts a foot wrong. With the ‘want it’ trend, women are under more pressure than ever to manage superhuman tasks while looking like dewy roses with not a hair out of place at all times.

It is ironic that even in emancipated western countries, women are paid less for the same work as their male counterparts, with a recent American study revealing that women were paid only seventy-five cents for every dollar earned by the men. The picture is bleak in countries like India, where women work in far more menial tasks at construction sites, as household helps or in sweatshops where they earn less despite working longer hours.

Another glaring example is the Indian film industry, where the so-called ‘Queens of the Heart’ are paid a fraction of what the ‘Badshahs’ receive for films promoting women empowerment! In many families, women hardly have a right to what they earn, with a male family member taking over either the investment or spending the money.

Although a journey of a thousand miles begins with a single step, we have miles and miles to go before we gain any semblance of equality between the sexes. Yes, laws being enacted and landmark decisions like the recent one by the Supreme Court, which ruled that the value of a homemaker’s contribution was the same as her husband’s in his office, are steps in the right direction, but we still need to gain Herculean proportions to clean out the Augean Stable of inequality which has been festering in our society through the ages.

This can happen when women are accorded equal rights from the cradle to the grave in the form of zero female feticides and infanticides and similar funeral rights granted to both bachelors and spinsters that we can proudly call ourselves a truly egalitarian society. 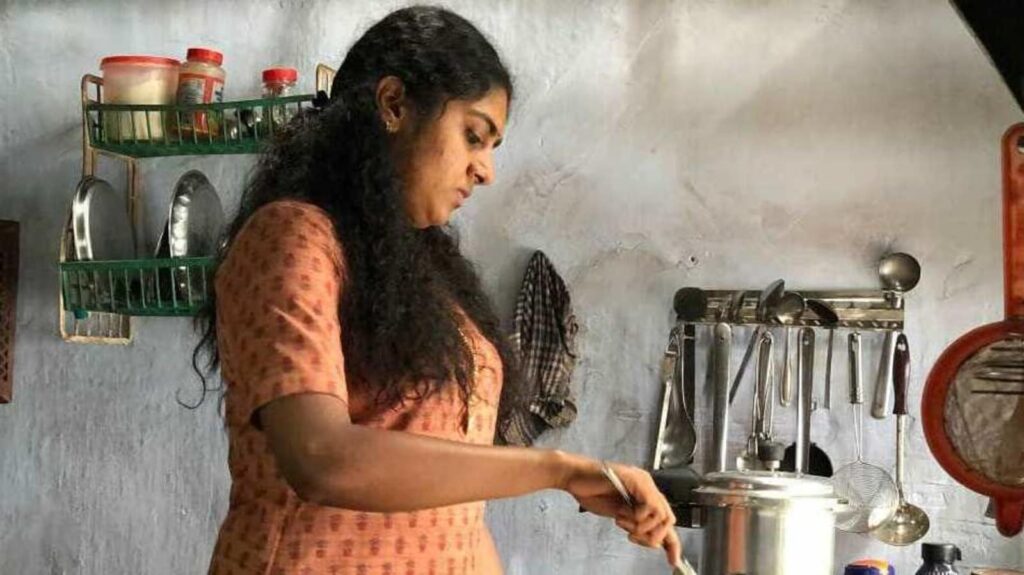 Nimisha Sajayan in a scene from The Great Indian Kitchen

Until then, those of us who face the great Indian inequality daily can hope that the appeal the brilliant Malayalam movie ‘The Great Indian Kitchen’ had to our collective conscience is the beginning of our journey of a thousand miles where we can truly embrace the preamble of our constitution which guarantees equality, liberty and justice to all its citizens! It is high time that we call out the invisible enemy of inequality for what it is – a millstone around the neck which genuinely needs to be discarded so that Indian women can soar to reach their true altitude.