Like everything else, our minds are most fascinated by what happens in the celluloid world! The word robot immediately conjures up a vision of a machine that imitates a human, like the androids in Star Wars, Terminator, and Star Trek: The Next Generation. We immediately envision metallic human-like objects that move around in a jerky, stilted fashion and are there mostly to obey human commands. Thanks to the movies, we always have the fear that these robots will suddenly turn malignant and either develop a mind of their own or become programmed by a malevolent, maniacal, supervillain.

Science fiction writers and moviemakers have always taken artistic liberty to shape our imagination and thoughts by literally “going where no man has ever gone before!” These are not only flights of fancy, but some of these fantastic renditions have served as an inspiration for the real-world scientists to come up with ideas that not only mimic but improve upon what they have seen in the movie world.

Robotics is a field in its infancy and is rapidly growing and constantly evolving almost daily. The bold writer attempting to write an article on the current state of Robotics may find himself outdated just a week after he has submitted his/her article. Nevertheless, I find this topic fascinating and would love to share the magic of Robotics in the field of surgery. Please note that I will only be discussing the applications in surgical fields and not in the field of medicine as a whole.

History of Robotics in Surgery

A short digression into the history of Robotics in surgery. The first documented use of Robotics in surgery was in performing a delicate neurosurgical biopsy in a deeply situated area of the brain, way back in 1985. This was quickly followed in 1987 by the first laparoscopic cholecystectomy done by a robot, and then the floodgates opened.

Currently, robotic surgery is being used for any and all types of operations that can be performed laparoscopically. The extent of and the scope of surgeries is only limited by the imagination of the surgeon as skills are rapidly catching up with the technology, allowing the surgeons to perform the surgeries with far greater dexterity than what can be performed by humans.

So what exactly is the formal definition of a robot?

A robot is a machine—especially one programmable by a computer— capable of carrying out a complex series of actions automatically.[2] Robots can be guided by an external control device, or the control may be embedded within.

Applications of Robotics specifically in Surgery

A brief overview of how robots can help in surgery 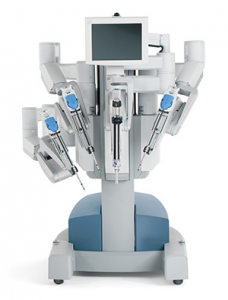 The DaVinci system is the first truly surgical Robot that was designed way back in 2000 and has been installed in more than 4500 sites all over the world. Our own city of Mumbai now has more than 5 installations, and these have been growing every year.
The basic setup is like this:

The surgical proceedings are just like any laparoscopic operation.

All in all, the current robot that is available while extremely valuable is simply too expensive. Unless one has extremely high volumes, it may be difficult to justify the investment (Author’s view and does not reflect that of the website).

The encouraging scenario is that the Da Vinci monopoly is about to end. There are more than a dozen countries across the world, developing their surgical robots. This will certainly decrease the costs of acquiring a robot, as it also leads to faster development of newer and improved technologies as companies compete fiercely and try to outdo each other. 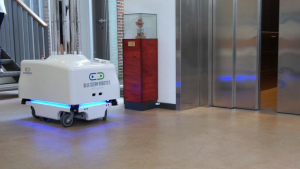 From the glamorous to the distinctly unglamorous!

The preparation before and the cleaning up after an operation is a huge task and involves as much knowledge and time as the surgical procedure itself. The OT needs to be cleaned up of all the residue of the surgery in a safe manner and all waste disposed of safely after segregating the different types of waste.

Semi-skilled manpower is employed by the hospital, who are again subject to human frailties. Robots have been developed (constantly improving) that will clean up the OT, sterilize it very efficiently in almost no time at all. The direct benefit is a faster turnaround that will improve OT utilization significantly. Robots will clean and disinfect surgical instruments in an extremely efficient manner. These robots can be deployed in other areas of the hospital as well and will pay for themselves many times over. 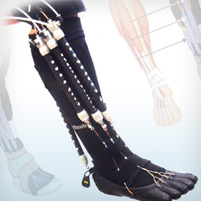 The orthotic robot is also called the exoskeleton robot acts as the name implies, as an exoskeleton to support individuals in their day to day activities that are otherwise restricted either because of significant trauma or because of neuromuscular disease. Many systems have been developed, and a lot of them have already been deployed in clinical practice. They have proved to be extremely useful in restoring mobility.

These are just a few of the applications of Robotics to surgery. If one includes other fields in Medicine, this article could be endless! Even now, I have managed to just scratch the surface of the potential of Robotics. Advances in artificial intelligence, when combined with robotics, has opened up the field in such a way that the sky is truly the limit!

I am sure that a person reading this article just a few years down the line might find it interesting as a historical perspective, much in the same way that we wonder at how surgeries were performed by barbers without the use of any sort of antisepsis with pus being lauded and considered a great outcome. Anaesthesia was, of course, keeping a bullet in between the jaws leading to the term biting the bullet!

When should Doctors Retire ? 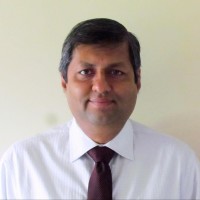 Dr Rajesh Nathani is a Paediatric Surgeon with some of the leading hospitals in Mumbai and also successfully runs his clinical practice. He is an ardent reader and an enthusiastic blogger.