Of Waves and Vibrations: Cymatics in Healthcare

Intriguingly, we are exposed to so many types of sounds every second, yet we know very little about how vibrations affect us and the world around us. That brings us to the world of Cymatics!

Cymatics is the science of sound made visible. It is based on the principle that when sound encounters a membrane such as the skin or the surface of the water, it imprints patterns of energy invisible to the naked eye. If we could see all the sounds around us with our eyes, we would probably see myriads of holographic bubbles, each with kaleidoscopic patterns on different surfaces. Cymatics analyzes sounds by applying principles of wave mechanics. Since sound is a type of wave, it can be displayed via visual media.

Watching Cymatics in action can be very thrilling! The first time you see particles of sand or iron filings dancing to the rhythm of a song — or view water pulsing a visual pattern in response to the sound you’re hearing – you become enthralled. Something that was previously inert matter for the human eye is now moving. The more we learn about this fascinating science, the more we come to recognize that sound and vibration permeate absolutely everything. 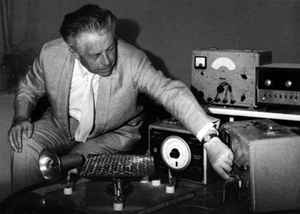 The term ‘cymatics’, was adapted from the Greek word for wave, ‘ta Kyma’, by Swiss medical doctor and natural scientist, Hans Jenny (1904-1972).

Further, in the eighteenth century, Ernst Chladni, a German musician and scientist worked extensively on cymatics and developed the instrument which is now called the ‘Chladni plate’. His contemporaries such as Alexander L, Thomas J M, and John Stewart Reid continue to work on various aspects of this emerging branch of study.

While the use of sound and music can be found in many spiritual and sacred cultural traditions in the Indian, African, Indigenous American and Egyptian cultures, sound healing is a relatively new modality in Allopathy.

What is Cymatic Therapy and How Does it Work?

Cymatic therapy is a form of sound therapy that is not applied through hearing, but by instruments that send audible sound waves directly into the body, through the skin. Cymatic therapy,  as we see it today, was developed by physician Peter Guy Manners, M.D. is based on the principle that every cell in the body is controlled by an electromagnetic field, which resonates at its own unique sound frequency. The entire body is seen to have a composite harmonic frequency with its own personal vibratory rate as unique as a fingerprint. Even our bones, organs and tissues vibrate at a unique frequency.

When these different parts of our body are vibrating at their normal, healthy frequency, it is seen as a state of ‘health’; when a portion of the body begins to vibrate at a frequency that is not harmonious to a person, it is seen as ‘disease’. Based on the science of Cymatics, if the diseased organ or tissue, such as a kidney or liver, is exposed over a period of time to the correct frequency of a healthy kidney or liver, it will cause the vibrational pattern of the diseased organ to correct itself and return to a state of health and harmony.

Hans Jenny was able to teach deaf children to speak better and improve their notations and pronunciations by having them look at the cymatic patterns emerging from their own voices. This science can also be used as a non-invasive treatment for various medical and brain-related conditions.

When conducting surgery to remove metastatic tumours, it can be difficult for surgeons to differentiate between healthy and cancerous tissues at the margin of the tumour.

The CymaScope instrument, developed by the acoustic-physics researcher John Stuart Reid is being used to tackle this challenge, which could, in future, increase positive clinical outcomes of cancer surgery by creating cymatic images of the cells. 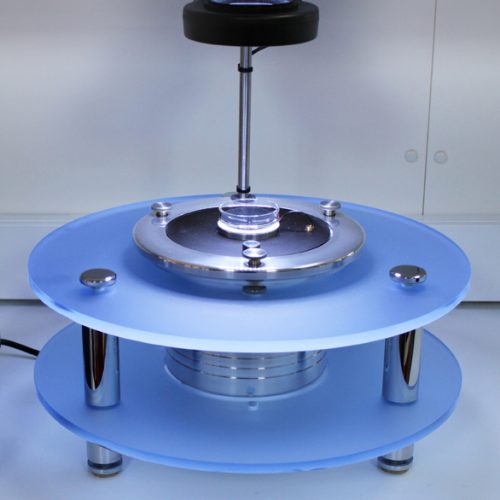 While researching for this article, I came across a paper published in ‘Advances in Intelligent Systems and Computing, by  Associate Professor Sungchul Ji and Professor Beum Jun Park of Rutgers University, in collaboration with John Stuart Reid. This paper describes a novel classification method of differentiating between cancerous and healthy cells. This is referred to as the Planck–Shannon classifier (PSC) or the Planck–Shannon plot (PSP).

All cells, except for brain cells within the body, have natural respiration and this cell movement creates sounds inaudible to the human ear. This new science, called sonocytology, was discovered by Dr James Gimzewski in 2002. 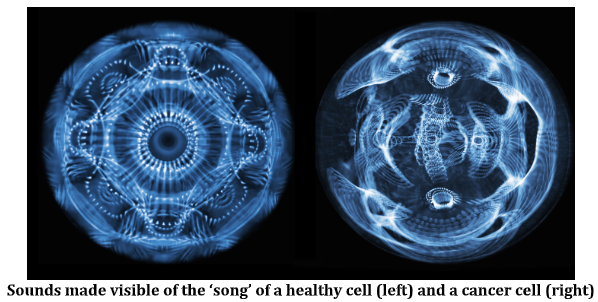 It was observed that the cancer cells generate chaotic sounds, while healthy cells generate harmonious sounds. When these sounds were injected into the CymaScope instrument, two types of cymatic patterns appeared. The healthy cells producing harmonious sounds were associated with beautiful, symmetrical patterns, and the cancerous cells were associated with skewed patterns.

These images were then captured by a digital camera and were quantitatively analysed using the Planckian Distribution Equation (PDE).  It was then concluded that using the new Planck-Shannon classification method, which is formulated based on PDE, had successfully distinguished between the cymatic/Faraday Wave images from the sounds of cancerous and healthy cells.

The likelihood of a device that would be fitted to the eyewear of a surgeon and project these cymatic images directly in their spectacles is soon possible. This would help them decide where to use their scalpel. On the surgeon’s end, a Raman spectroscopy laser probe will help scan the tissue. During this process, the laser beam is reflected as modulated signals from thousands of cells. The signals that are received will then be demodulated and injected into the cymascope.

In the eyewear of the surgeon, a cymatic picture would be seen and they can very easily decide where to use their scalpel. The authors of the report believe that this method will result in more successful cancer surgeries and will automate histopathology.

These cymatic images are truly awe-inspiring, not only for their visual beauty in portraying the inherent responsiveness of matter to sound but also because they inspire a deep recognition that we, too, are part and parcel of this same complex and intricate vibrational matrix.

There is also a reference to cymatics in the Ancient Indian scriptures (The Vedas)  which state – ‘NADA BRAHMA’, which means that the world is nothing but sound.

Let’s Prepare to expand the way we look at our world.