‘WHEREVER you GO, it becomes a PART of YOU’.

Trekking is the best way to lose yourself if you want to find your true self again! I trekked to Gangotri – Gomukh a year before the Corona Pandemic.

The Himalayas speak to us as we trek. They say, “Climb over us and get good tidings. The peace of Nature will flow into you as sunshine does into trees.”

Gangotri at 3,100 metres (10,200 ft) is a Nagar Panchayat (municipality) in Uttarkashi district in Uttarakhand state. It is on the banks of Bhagirathi in the northernmost Himalayas called Greater Himalayan Range or Himadri. The world’s highest peaks are located in this range.

From Gangotri, one ascends nearly 3,000 ft along the Bhagirathi River to the source of the sacred Ganges – the Gomukh, the terminus of Gangotri glacier, at a height of 13,200 ft (4,023 m).

After the 26 July 2016 floods, the front end of the Gomukh has been washed away. 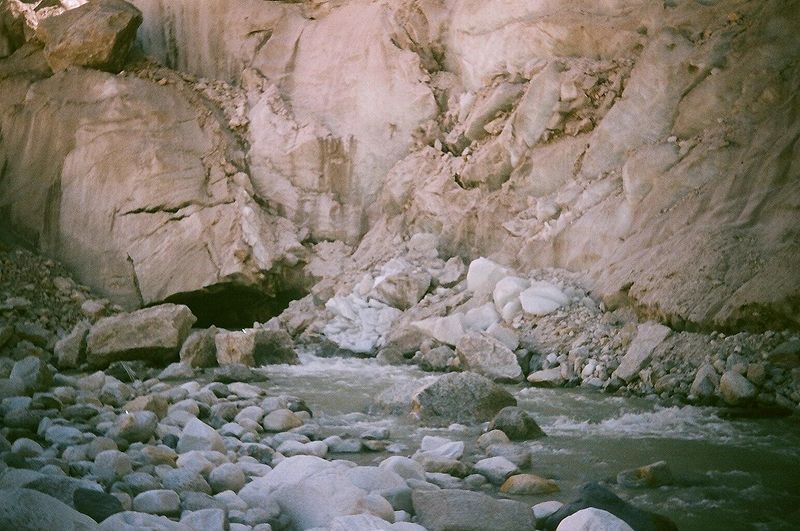 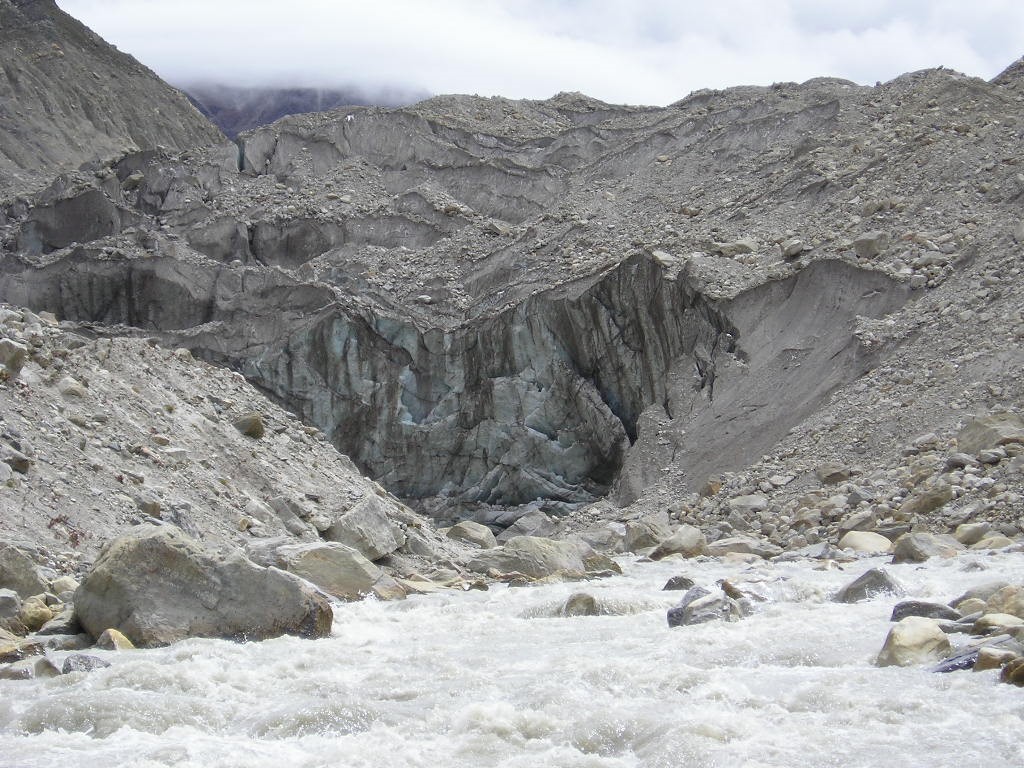 Disappearance of the front end of Gomukh after 26 July 2016 floods. 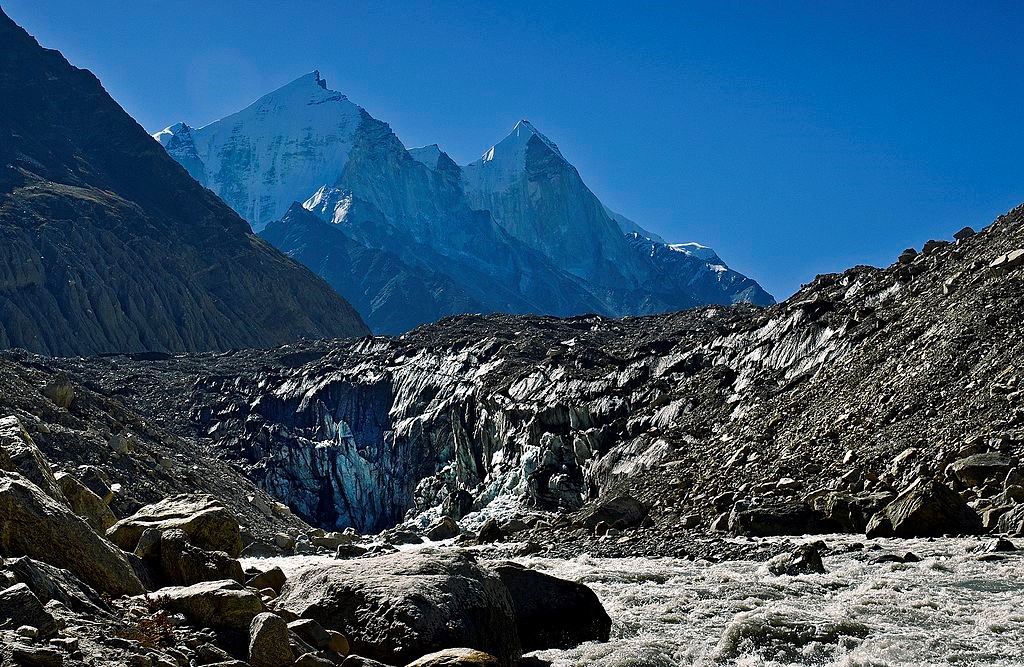 This reflection came to me in a flash and caught me unawares. A deep reality suddenly sank into my mind that,

To understand it deeply, let us study how the mighty Ganga is formed.

What will happen if you are blind folded and taken to Gomukh?

If you are blind folded and brought to the source of the fabled Ganga at 13,200 ft (3,892 m) and not told anything about its greatness, you’ll find that around the snout of Gangotri glacier (the Gomukh), there is only wilderness! There are boulders and broken chunks of ice scattered around along with the hard clayey snow of the glacier. You will find that the small spout of water emerging at Gomukh is very ordinary and unimpressive, though it is called the Bhagirathi. The Ganga thus begins as a small, unremarkable stream of water spouting from a glacier.

The word Gomukh/Gaumukh (go/gau=cow, mukh= mouth) literally means “Mouth of a Cow.”  It is said that, while searching for a lost sheep, a hill shepherd boy reached the snout which looked exactly like the face of a cow, and thus it got its name ‘Gomukh’.

The Bhagirathi flows from Gomukh down to Gangotri and then to Uttarkashi town, fed by no less than six tributaries until reaching the old town of Tehri at 755 m (2,477 ft).

Thus, with SIX tributaries joining the Bhagirathi, she swells in size, volume, grace and speed. She now cuts through the Lesser Himalayas forming narrow gorges, flows for 193 kms, before merging with Alaknanda to form the River Ganga at Devprayag.

The Alaknanda River is also fed by six tributaries and flows for 664.5 kms, while the Bhagirathi River, including its tributaries, flows for 456.5 kms.

When you compare the tiny spout of water at the Gomukh with the mighty Ganga at Rishikesh, you are hit by the fact that even the mighty Ganga was born as a tiny rivulet and needed the Bhagirathi and its six tributaries as well as the Alaknanda and its six tributaries to become the eternal river of legend, The Ganga, which rules the hearts and minds of a billion people.

Without the contribution of several others, the Ganga would not have been ‘worth its water’!

THE METAPHOR AND THE REFLECTION:

We humans too are the product of so many tributaries –which contribute to make us who we become in life. We often need many more than just six tributaries. All of them pour their ‘waters’ of caring, money, nutrition, clothing, experience, mentoring and what not, so that we grow like the Bhagirathi does, into the Ganga.

Later, if we continue to flow in our desired direction with fair discipline, while receiving the above six tributaries at least, only then are we blessed with that big break of career or achievement or recognition, akin to Alaknanda’s pouring its water into the Bhagirathi to let us become the Ganga.

It made me ponder.

What have we then ‘independently’ achieved in life?

Are we not obliged to those who contribute to our growth like the tributaries of Bhagirathi and the Alaknanda do for their blessings?

Why do we forget their contributions and swell in the ‘flood’ of ego, destroying ourselves as well as our surroundings? By the way, this ‘flood’ occurs not once, but so many times in life!

INDEPENDENCE is the biggest myth in life. It is only INTER-DEPENDENCE that allows us to ‘flow’ onwards and achieve our goals.

Metaphorically, both streams contribute to the Ganga of our lives- the Alaknanda, as a thought; the Bhagirathi, as an emotion. Both inter play to create the might of the Ganga in us. Hence both deserve gratitude and respect. If we recognize the role of both these streams in our lives, we understand that what contributes to the genuine me. That I become myself, achieve lofty goals because of the umpteen contributions, both large and small, which others make to my life.  This recognition is true maturity. Till then, its hypocrisy!

Interdependence is a fact, it’s not an opinion. The whole idea of compassion is based on a keen awareness of the interdependence of all living beings.

As we progress towards a mature personality, we first declare independence, and then we recognize interdependence.

My upward trek to the lofty heights to Gomukh also made me climb downwards into my soul to find the earthy ground of interdependence, of gratitude and living with this great understanding. To realize that the might of a life owes everything to the myriad contributions of many generous souls, just like the Ganga which grows due to each of its tributaries. 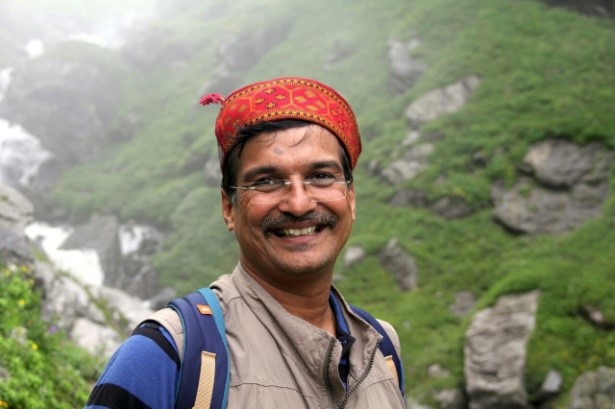