I Am Malala: The Girl Who Stood Up for Education and was Shot by the Taliban

I AM MALALA is about a girl who fought for the right to be educated in a nation controlled by the Taliban. This is a must-read because in this book she has beautifully described her journey from being a girl with normal life to being an activist who became the youngest Nobel prize winner. Most of us know a lot about her from the media, etc., but do we know it all, the whole story? This book is about that journey.

Tolerance isn’t about not having beliefs. It’s about how your beliefs lead you to treat people who disagree with you.

Intolerance is a topic that is prevalent in many countries yet the least discussed. Most people don’t have an insight into this topic only because their life is not affected by it. But, those who live in an environment where they have to struggle each day for their basic rights have a different view of life. One such person has been Malala Yousafzai. It is quite unexpected how a young girl could go through so much and still come out as an inspiration to many. The book ‘I am Malala’ is all about her journey from Mingora, Pakistan to being the youngest Nobel prize winner.

Do not wait for someone else to come and speak for you. It’s you who can change the world.

This book is an example of how a single voice can change the course of so many things, how the number of supporters you have is insignificant in front of the willpower you have and how even the most underestimated people can change the world. The book starts its journey from Pakistan where Malala was born and brought up and then takes a turn to Europe where she recovered and followed her journey as an activist. 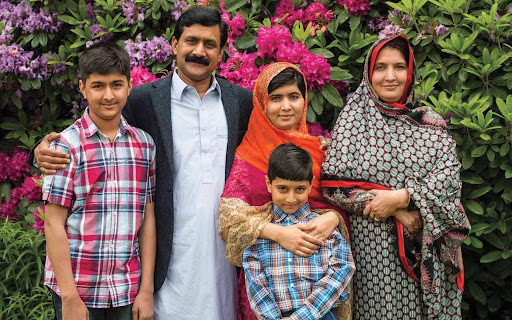 Malala Yousafzai with her family

Malala was just a girl from a normal family, who believed that education is not a thing that can only be owned by a particular gender. She had a normal childhood like most of the children until the Taliban took over her land and began implementing irrational rules. The terrorism they spread affected every person there.

And our youngest Nobel prize winner and her family were one of those– they never supported violence nor did they give up what they believed in, even when the time was grave. She is indeed talented, that is why even when the world didn’t know her name, she was asked to write a journal by the BBC news channel about how the Taliban has been affecting her life.

Malala was the girl who was shot for asking and fighting for her right to get educated. Today, she is a young woman who is the reason why many girls can study without fear. She is an inspiration to not only girls and women but for all those who doubt a single person’s ability to bring about change. Malala is the reason why the Pakistan government passed the Right to Education Bill in 2012, which states that every child between the age of 5 to 16 years has free access to education.

Why I Recommend this book…

While going through the initial chapters of the book, I thought it’s just a simple story. It is so easy to take the main character out of the book and place a substitute, it’s so plain. But as the book proceeds, it becomes so difficult to separate Malala from the story and imagine someone else doing what she did. It is an autobiography and it’s her honesty and unpretentious nature that has kept everything so real that the book seems like a journey.

It is a book about a hero or more correctly a heroine who advocated for women’s education but it doesn’t start that way. It starts with a very simple life of an insignificant young girl that gets complicated and tests her abilities throughout. There are very few who can muster up the courage to fight, even after they have gone through a life-threatening incident. It’s difficult to fight being away from your homeland, knowing the people with whom you grew up are still there, going through a lot. 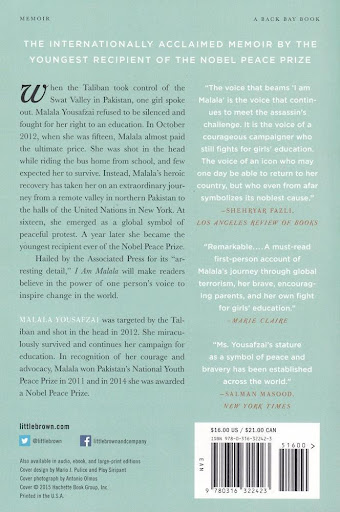 The back cover of the book

This book doesn’t excite you, it doesn’t entertain you but it teaches you a lot in very subtle ways. It is written in a simple language making it easy to understand. It was published in October 2013, exactly a year after the Taliban shot her. She had already shaken the world by her courage, but this book was necessary to tell her story – a story which is hope to many and power to many more.

I recommend this book to every person, young or old because all of us need to learn what all forms of intolerance can take and how we can fight it. There are many who don’t realise why it’s difficult for women, how they have to fight for even their basic needs. And it’s a must-read for both, those who believe that women can take the world by their courage and those who don’t believe it because the correct notions need to be strengthened and the wrong ones need to be changed.

This life-changing book is available in Paperback and Kindle versions.