Emerging From the Environment

“We do not inherit the Earth from our ancestors, we borrow it from our children!”

If the recent uproar on the origins of the coronavirus is anything to go by, it must be said that all that it takes for the disease to migrate from animal to humans is a small jump across species. To misquote Neil Armstrong, “ It is a small step for a virus but a giant leap for virus kind!”.

Human beings catching diseases from animals is not new, the best historical examples being anthrax and bubonic plague. Zoonoses (zoonosis, singular) are not new for mankind and account for almost 60% of emerging human pathogens.

The Emergence of Zoonotic Diseases in the past 30 years (Image Source: https://www.rural21.com/francais/regardons-de-plus-pres/detail/article/countering-the-double-whammy-of-zoonotic-diseases.html?no_cache=1)

A zoonotic disease is defined as a disease that is transmitted from animals to humans, occurs naturally in animals but is not well adapted to human transmission. The WHO defines emerging zoonosis as “ that disease which has occurred previously but shows increased incidence or expansion in geographic or host or vector range”. 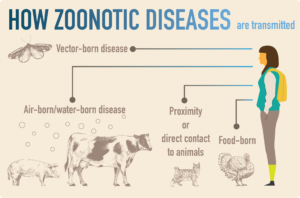 Which brings us to the question of whether these emerging diseases are a result of the change in the environment caused largely by human factors? The answer in most cases is a resounding yes and it has been proved that this cross-species transmission of the disease is the result of several factors which affect the environment either directly or indirectly. 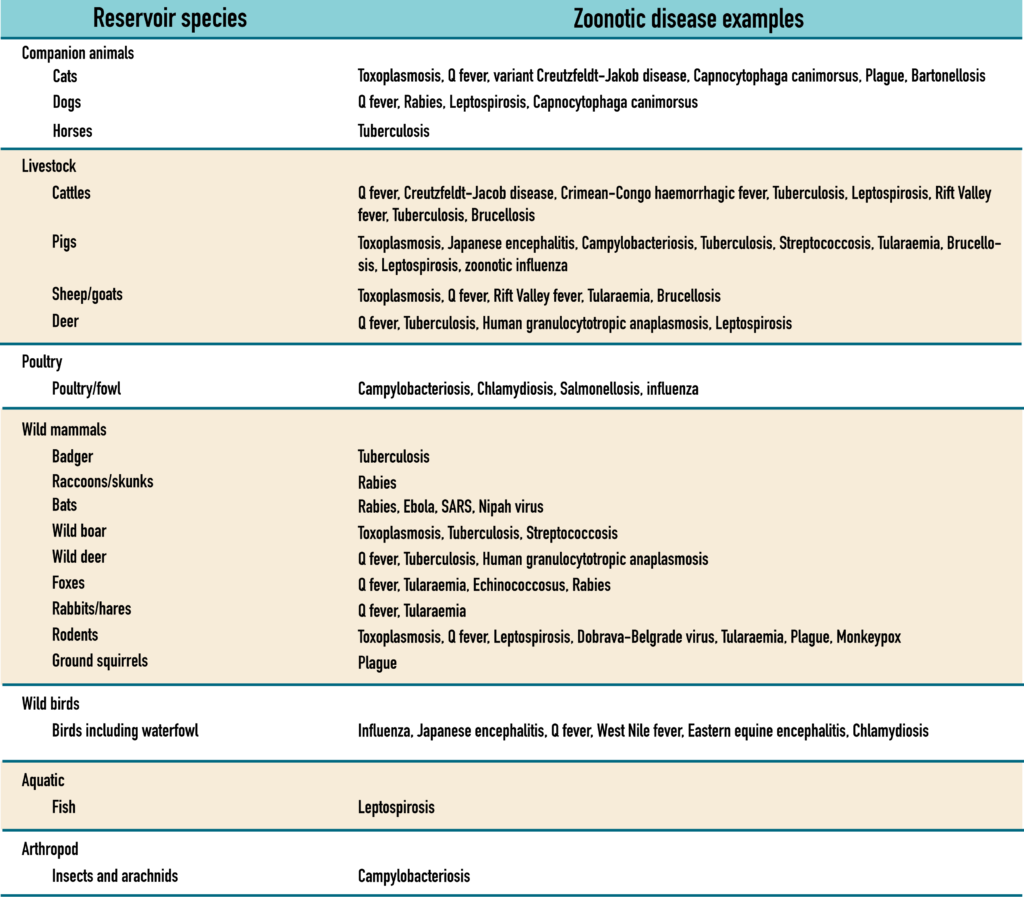 Some Zoonotic Diseases with their Reservoir Species (Image Source: https://blogs.egu.eu/divisions/cl/2020/03/16/corona/)

The following factors are deemed to be responsible for the rapid emergence of novel zoonotic disease in the modern world. They merit detailed consideration to understand the current trend:

Increased temperature of the Oceans and raised ocean levels

Caused due to melting of icecaps. Insect vectors are mainly benefited due to flooding which is conducive to breeding.

Many zoonotic diseases like Rift valley fever peak during periods of heavy rainfall due to an abundance of the mosquito vectors carrying the same.

Global trade allows the supply of material to any corner of the planet and with it is capable of carrying vectors like mosquito species across the globe too, resulting in outbreaks of vector-borne diseases in non-indigenous areas. Live and wet markets that involve close contact of different species allow pathogens to jump across species and cause diseases that may be deadlier or rapidly transmissible.

With the keeping of exotic pets being in fashion, constant close contact with them can result in zoonosis.

With population explosion, large new tracts are being cleared for farming resulting in environmental change which by itself is a risk factor for zoonosis. In addition, to keep up with the consumer demand, large scale animal husbandry results in creating huge reservoirs of zoonotic diseases. Further, administration of antibiotics to such animals results in resistance to any zoonotic agent which they may carry.

Large-scale food production, processing and distribution especially of meat products can cause outbreaks of zoonotic diseases, especially if the processing is faulty.

Loss of biodiversity results in the reduction of the dilution effect since fewer species are available for vectors to breed and hence a load of vector-borne zoonosis on individual species rises. The urban expansion brings humans in closer contact with animals and can result in novel zoonosis due to cross transmissions. Further, urban setups may provide better breeding grounds for vectors. Migration of newer population groups to urban areas means the addition of people with no immunity to the indigenous diseases and can result in epidemic outbreaks.

Consumption of bushmeat and hunting

The butchering of carcasses in forests is fraught with the risk of transmission of airborne, droplet and contact spread of zoonotic pathogens especially during the hunting of non-human primates.

Apart from the effect that it has on the environment, conflict stretches health care provision and can thus result in furthering the outbreak of zoonotic epidemics.

This may be directly attributed to overuse/misuse of antibiotics resulting in resistance in the pathogens. Discharge of pharmaceutical wastes into the environment may be a contributing factor.

Affected by climate change and limited habitat results in changes in migration patterns as well as closer human contact and the emergence of fresh zoonoses.

After considering the varied factors responsible for the widespread occurrence of zoonosis, it can be concluded that the changing interaction of humans with the environment is a major factor in the emergence of novel zoonotic diseases as well as more scope for the spread of the existing ones.

Thus, understanding the environment better is key to prevent the emergence of new zoonotic diseases.