When you utter the word twenty-twenty it sounds so rhythmic and musical, especially to our country that is overdosed with cricket T20’s and IPL. No one ever expected back to back disasters in this year from varying quarters – that too to lash relentlessly. A few of us can relate to one or more of them in some form or other and hence, this write up.

It has been difficult to come to terms with such a stormy phase of life. When news broke out about a viral pandemic in Wuhan, we thought it was ‘just a storm in a teacup’. Gradually, the ‘storm gained steam’ and realisation dawned upon us about ‘the calm before the storm’. Since then, a lot of ‘brainstorming’ happened, with a ‘webinar storm’ so often, that even the layman started discussing the ‘cytokine-release storm’.

A couple of months passed and the world was flattening its curve. Our country reported a low death rate despite a huge population – when the ‘cyclonic storm’  Amphan hit our eastern shores and left behind a trail of devastation. The western counterpart of our country, namely the Arabian Sea, was always looked upon as calmer in comparison with the rougher Bay of Bengal. Thus, it was undeniably shocking to have a storm originating on the west coast. It was called Nisarga – the nature, and it lived up to its name of being friendly as ‘every storm happens to run out of the rain’.

The meteorologists called them by different names – gale, squall, typhoon, tornado,  hurricane and so on, probably based on their intensity. The bard was the pioneer as he called it ‘The tempest’ and gave a female name to the spirit Ariel who initiated it.

This trend caught on. I don’t want to be caught in the ‘eye of the storm’ but  Shakespeare had different views towards the fair sex. He named (the storm) and tamed (the shrew). If it was all about notoriety, I would rather name the storm as Adolf, Idi or Polpot and we have no dearth of them in our own country.

The naval ships always had a female nomenclature because they can ‘weather the storm better’. Circa seventies, when men also wanted to be included in the naming ceremony to correct the gender bias. From the year 1978, masculine names were also introduced to name the storms to represent a macho image.

My personal belief is that, since anything terrestrial in the homeland is addressed as fatherland, the pelagic event should be given a feminine name. Besides, amongst the natural elements, we know that water is more dynamic than the Earth, thus justifying female dominance.

During my geographical lessons in school, I read about ‘dust storms’ happening in deserts and semi-arid zones. As the gust transports small fine particles by saltation and suspension a new meteorological phenomenon occurs. This time, the desert in our neighbouring country ‘kicked up another storm’ called the ‘locust storm’.

I believe ‘every storm draws something out of us that a calm sea doesn’t’.

The short-horn grasshopper in its ‘solitary phase’ is green/straw-coloured, can only hop, seems lonely and depressed. A good shower and an abundance of food in the desert brings about a phenotypical change to a yellow morph – development of wings to fly and a berserk behavioural change in the ‘gregarious phase’. Taxonomically, it’s the same species – which in Biblical proportions, now develop a swarming behaviour due to Serotonin surge. There is mention of these plague-like outbreaks in Iliad, Mahabharata and the Quran.

These exploits reflect a template of cyclothymic personality in humans prone to bipolar disorders. The conduct in the former phase is vulnerable and suicidal,p while the latter phase is almost manic with voracious appetite bordering on cannibalism and extreme indulgence reproductively; from brooding to breeding.

All of us work within the realm of job ethics that encompasses a professional hazard at times leading to a personal storm. Like many others from our fraternity, the ‘bio storm’ hit yours sincerely. Been there, done that – the features of bi-phasic fever,  initially due to viremia and later to a hyperinflammatory response, extreme dehydration with hyponatremia and severe fatigue compelled institutional management. Fortunately, a relatively robust constitution (thanks to parental genes),  well-maintained SpO2 and Almighty’s blessings, the recovery was uneventful. I am reiterating a tribute to the COVID Task Force in general, though what follows is more specific and personal.

The featureless COVID has been ruthlessly striking the human race for the last six months. This foe has no true form and is faceless. On the other side of the battlefield are the true warriors behind the hazmat suits with their identity unrevealed. The brave hearts were wounded physically and bruised emotionally but not once did they complain. In today’s times, when a 6 x 4 paver block carries a banner of the politician, triple its size, these task force front liners discharge recovered patients – without their names appearing anywhere, just appending as Fortis COVID Team.

I take this platform to wholeheartedly thank and unmask the faces behind the PPE  whom, for all you know, may bump into. The least they deserve is the gratitude from our community to bring a smile to their already cheerful faces. God bless Dr Rahul  Pandit, Dr Anita Mathews, Dr Kirti Sabnis, Dr Charudutt Vaity and the team of bhaus, maushis, and mamas. Let their tribe grow.

As I write this, we have already entered into quarter three of 2020. Let us consider this as recouping time, quarter four as restructure period to march on and welcome the New Year. Twenty–Twenty-One may not sound as melodious. However, it reflects one step up, numerically. Any step-up is welcome as it is progressive and that is the need of the hour.

Manmade Canopies at the Gardens By The Bay 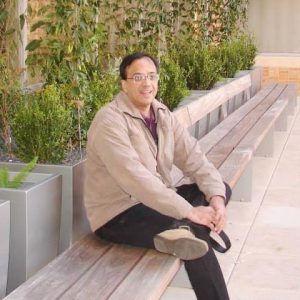 Dr. Parameswaran Shanker is a graduate of the TN Medical College, 1975 batch. After completing a residency house post from Nair Hospital, he started a Family Practice in Mulund. Gradually, he imbued nuances of Integrated Medicine into his practice especially, Hahnemannian Homeopathic therapeutics. His other interests include travelling, birdwatching, and other nature studies - specifically wildflowers and butterflies.