Gwalior is a fascinating region with a rich past. Earlier it was an erstwhile Maratha princely state ruled by the illustrious Scindia dynasty. Today it is a major city in Madhya Pradesh, the central state of India. HH Maharaja Jyotiraditya Madhavrao Scindia is the current head of the Scindia royal family and a notable figure in Indian politics. He is the grandson of HH Maharaja Jiwaji Rao Scindia (the last Maharaja of the princely state of Gwalior before the integration of Princely States took place after Independence), and the son of late HH Maharaja Madhavrao Scindia who was very renowned in Indian Politics and who was also a former Union Minister. In December 1994, he married HH Maharani Priyadarshini Raje Scindia who comes from the
Gaekwad royal family of Baroda. The couple has one son Yuvraj Mahanaaryaman Scindia and a daughter Maharajkumari Ananya Raje Scindia.

Built in 1874, Jai Vilas Palace is the major centre of attraction in the heart of Gwalior. It is the residence of HH Jyotiraditya Madhavrao Scindia who is the grandson of Maharaja Jiwaji Rao Scindia. A part of the Jai Vilas Palace has been converted into the HH Maharaja Sir Jiwaji Rao Scindia Museum by Rajmata Shrimant Vijayaraje Scindia in his memory. The HH Maharaja
Jiwajirao Scindia Museum was inaugurated by the then president of India, Dr Sarvepalli Radhakrishnan. The museum opened to the public on 12th December 1964. The magnificent palace was originally built to welcome Prince George and Princess Mary of Wales, who visited India in 1876, as per Outlook India. The palace is said to be an example of a ‘Neo-Classical Palace’ in India.

Sir Michael Filose was the architect of the Jai Vilas Palace. He visited each and every corner of Europe in the quest for creative ideas that inspired the present architecture and interiors of the palace. On his travel to various places, he collected fabric paintings, cut-glass furniture, tapestries, and antiques to beautify it. The architectural planning mimics that of the Versailles.
Its a combination of Tuscan Italian-Foric and Corinthian architectural styles. The expenses on the palace for construction in that era was around one crore in 1874 which amounts to 4000 crores as of now! 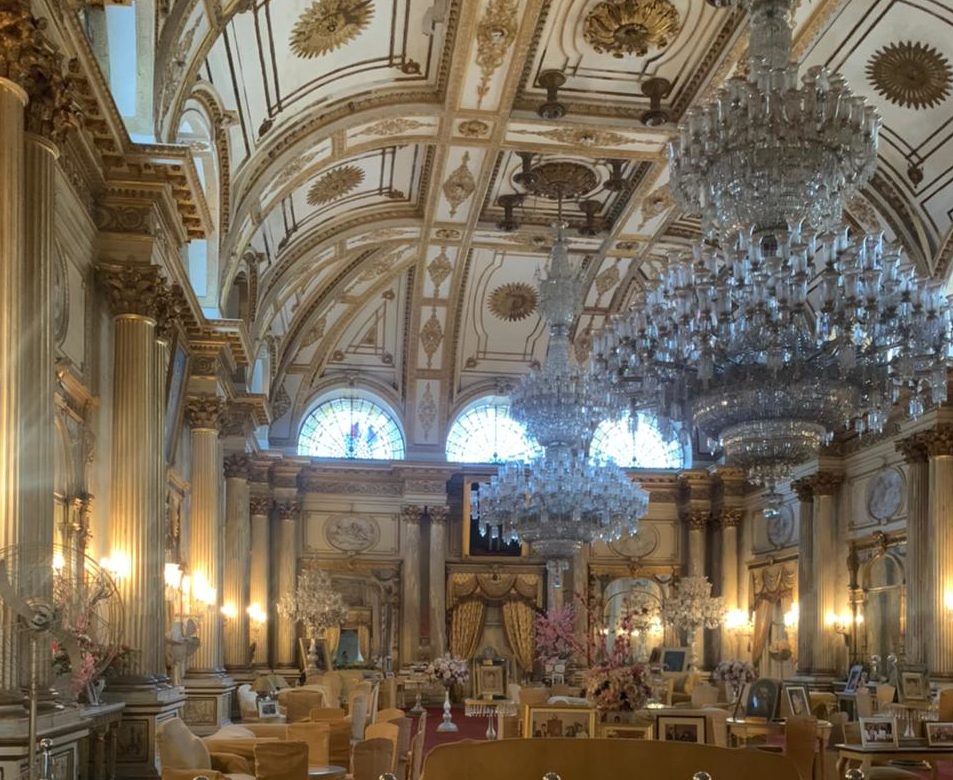 It has around 400 rooms and its exquisite Durbar Hall is intricately designed with gold furnishings and houses one of the largest pair of chandeliers in the world, weighing 3.5 tonnes (3500 kg) with 250 bulbs. It is said that around eight elephants were made to walk for a week over the roof of the Durbar Hall to check if the ceiling was strong enough to take the weight of the chandeliers. The Durbar Hall is laid out with Asia’s largest single woven carpet. This carpet was crafted by Gwalior’s prisoners and took 12 years to complete.

The Museum also houses the Banquet Hall that features a huge dining table with the famous Silver Train that was used for serving wine, snacks, cigars to guests during grand dining events. Across, the Banquet Hall is the Taat-Paat room which is used as another dining room by the Scindia royal family with a traditional floor arrangement with silver taats (thalis). 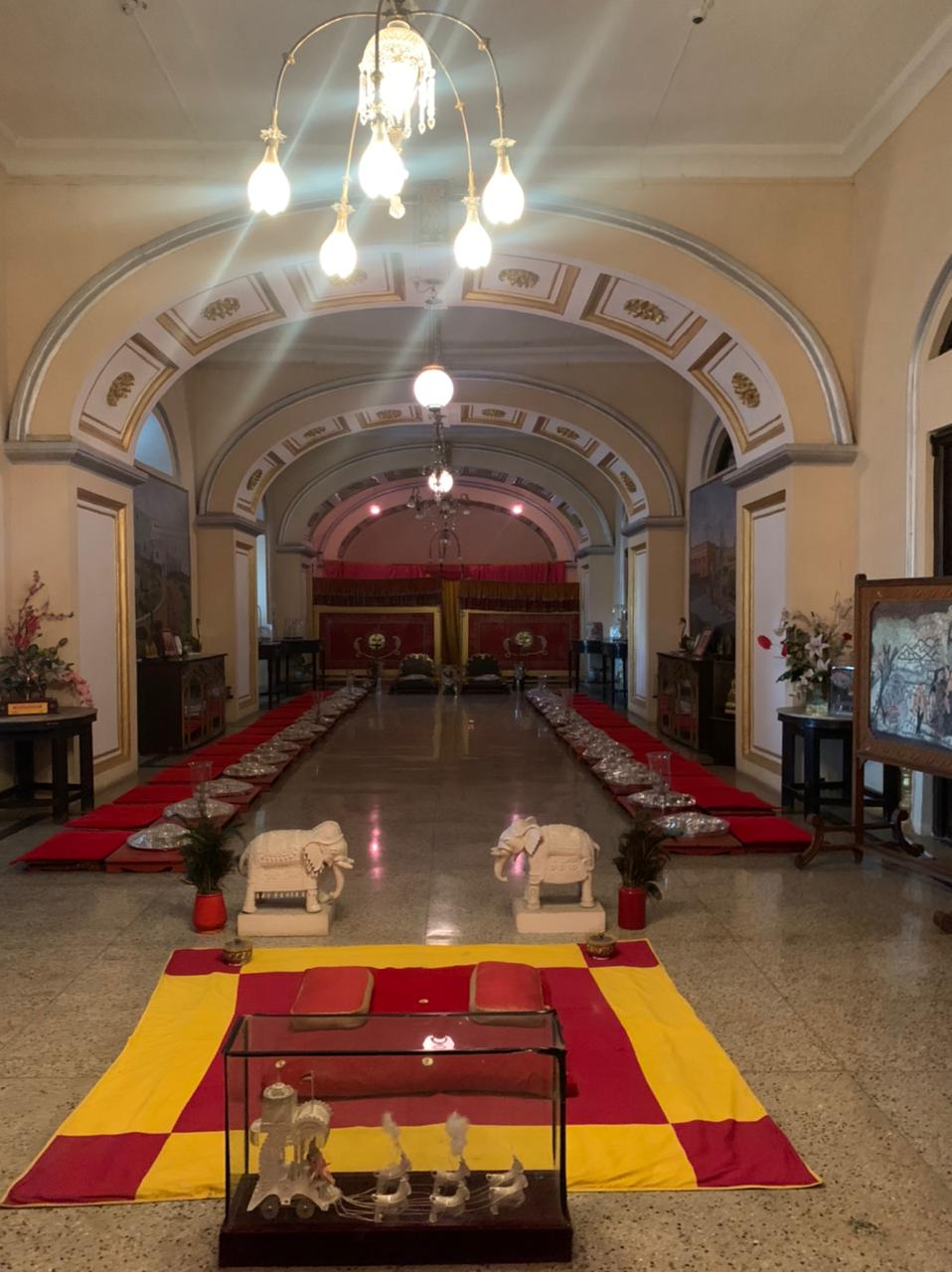 The museum exhibits valuable possessions, antiquities, and curios collected by generations of
the Scindia royal family. The belongings of some of the displayed articles can be traced back to
Louis XVI was the last king of France before the French Revolution took place. The displays
also include rare Mughal and European paintings, swords of Aurangzeb and Shah Jahan, gold
and silver accessories, antique furniture that includes Malabar furniture and unusually small and dainty furniture, specially crafted for Maharani Chinkubai Raje Scindia (4ft 2” in height) who was the first wife of Madhavrao Scindia I.

The Persian carpet, silver chariot, vintage cars, palanquins, the attire worn by the royals, lithographs of Tipu Sultan and Napoleon, and so much more. The traditional Shinde Shaahi Pagdi worn by the Scindias is also on display. 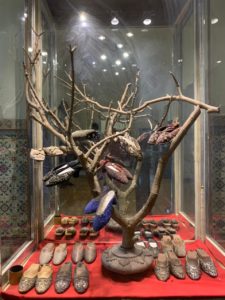 The palace used to have a separate huge indoor swimming pool with a bar for the ladies of the royal household only. Today, the Swimming Pool Gallery is a part of the Museum. Jai Vilas Palace also houses the State Room, Billiards Room, Durbar Hall, Royal Kitchen, Tiger Gallery, Chitrangada Raje Art Gallery and a Royal Library.

The extensive library of Jai Vilas Palace has around 5000 books on various genres. It also has the Chitrangada Raje Art Gallery, the perfect place for upcoming artists and craftsmen of the country to present their unique work to international audiences.

The grandeur and charm of Jai Vilas Palace its luxurious beauty has added to its lure which is a prime attraction that leads the tourists awestruck with the beauty of the giant palace.

Looking for a post-covid travel destination? Gwalior is a great place for your next holiday, especially for those looking for a perfect amalgamation of history, culture and relaxation.

The Grit & Fortitude of Nurses

Health and Fitness for Busy Nurses